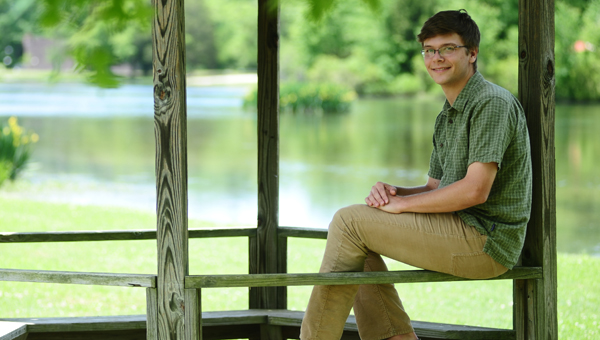 By LINDA LONG / Special to the Reporter

When the word overachiever made its way into the lexicon, linguists surely had Hill Balliet in mind. This Indian Springs School senior is a National Merit Scholar, AP scholar with distinction, and U.S. Presidential Scholar candidate and team captain of the ISS Scholars Bowl Team.

This scholar/athlete is also captain of the school’s cross country team, plays on the ISS baseball team, and as a freshman, won category two (highest category with a youth division) under 18 division of the Alabama Mountain Bike Series.

In his junior year, he won the state championship in the under 18 division of the Bamacross series in cyclo-cross, and last summer he went to youth nationals in Minnesota with the Birmingham Forge Ultimate Frisbee team. In his spare time, Balliet plays classical guitar.

And, just when does this outstanding student have spare time?

“Not very often,” laughs Balliet, whose main interest during his high school career has centered on technology, an interest that began back in the seventh grade, when he attended a summer camp at Duke University.

“At that robotics camp, I became interested in computer programming,” explained Balliet. “When I got back home, I just started teaching myself how to develop computer programs by using online tutorials and by working on various projects.”

Three of those computer programs are already in use at Indian Springs, including one that manages the purchase of meals in the school’s dining hall. Additionally, he has written a point-of-sale app with more than 36,000 lines of code to manage a custom-debit system and register interface at the school’s student-run store.

“Those two actually scan student identification cards that are handed out at the beginning of the year,” said Balliet. “So I made an app that creates your identification barcode on your phone, because a lot of people don’t carry around their ID cards. That one is in the Apple APP store. The other two will be available by the end of the year.”

The outstanding student will be attending Los Angeles based Harvey-Mudd College in the fall with a major in engineering. After college he hopes to eventually start his own business.

Pelham High School senior Dixon Atkinson is ready to get his own Internet business off the ground. (Reporter Photo/Jon Goering)... read more