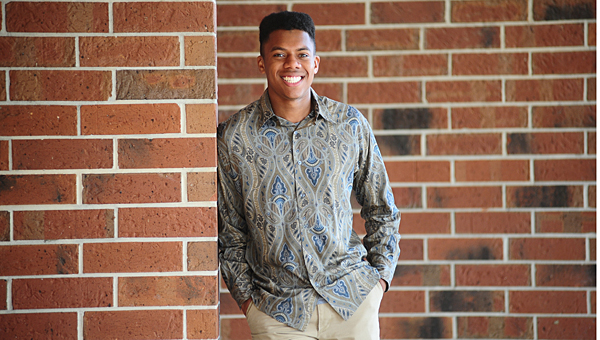 Thompson High School senior MacKenzie Clark is preparing to serve his country in the military after graduation. (Reporter Photo/Jon Goering)

By LAUREN HEARTSILL DOWDLE / Special to the Reporter

MacKenzie Clark not only represents his school through sports and organizations, but he will also be serving his country after graduating from Thompson High School.

Awarded for the Nine Who Shine’s military category, Clark joined the Junior ROTC as a freshman and decided last summer he wanted to further pursue the military.

He visited the United States Military Academy at West Point in New York, and he said he knew that was the place for him.

“There are a lot of opportunities there and different directions I could go with it,” Clark said. “I’ll be able to travel a lot in the military, too, which is something I enjoy.”

With help from his school sergeants, Clark applied for West Point and received an appointment.

“It (West Point) sets you up for the rest of your life,” Clark said. “It was an awesome feeling (getting accepted). Not until I get up there will I really realize how big this is.”

He’ll first go through six weeks of basic training before starting the academic school year in the fall.

While at West Point, Clark wants to become fluent in Spanish and pursue an environmental engineering major.

“I’ve liked Spanish since elementary school, and it’s always been an interest for me,” he says.

Clark’s other passions include sports: He’s competed on the cross-country, track and varsity basketball teams. His academics and school involvement are another priority. Clark is the Student Government Association vice president of his class and a member of the National Honor Society, Mu Alpha Theta and National Spanish Honor Society.

“He has been a model student-athlete with an impressive grade point average and ACT score,” said Pam Vickers, college and career counselor at Thompson and the one who recommended Clark for this award.

Clark has three brothers – Dorian Hamilton (deceased), Jeremiah Hamilton and Gregory Clark – and is the son of Gregory and Deirdre Clark.

More than 360 seniors graduated from Spain Park High School during a ceremony at the Pete Hanna Center at Samford... read more