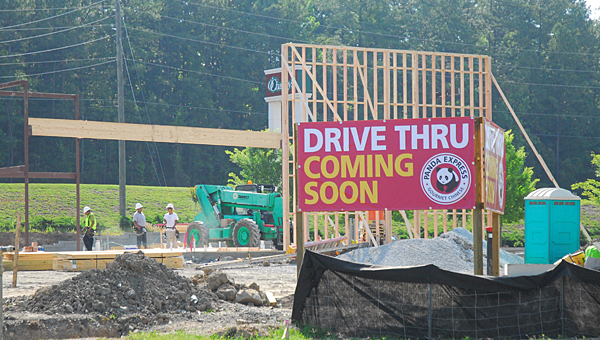 A drive-through gourmet Chinese restaurant soon will open in Alabaster’s South Promenade shopping center, according to a sign posted at the construction site on May 21.

Construction crews have posted a sign at the construction site reading “Drive thru coming soon” and displaying the Panda Express logo. The property’s owner, Bill Leitner, said he did not have an exact opening date for the restaurant, but said Panda Express is “moving expeditiously to get open.”

According to the company’s website, Panda Express operates more than 1,650 locations across the nation, including Alabama locations in Auburn, Tuscaloosa, Prattville, Huntsville and Madison.

The Panda Express development is covered under a previous tax incentive agreement between Alabaster and the project’s developer, Highway 11/31 II LLC. The Highway 11/31 firm also developed the Dick’s Sporting Goods store, which opened in April in the same shopping center as Panda Express.

The incentive package is tied to the city’s sales tax, and uses a tiered system over a 10-year period valued at up to $1.9 million.

Alabaster currently charges a 4 percent city sales tax, with 1 percent going to the city’s school fund to support the upcoming Alabaster school district. The incentive package will only apply to 3 percent of the city’s sales tax collected at Dick’s and Panda Express, leaving the 1 percent earmarked for the school fund intact.

Alabaster will reimburse the developer for 90 percent of the 3 percent city sales tax collected at Dick’s and Panda Express during the first year the Dick’s store is open. Alabaster City Manager George Henry said the “clock started” on the first year of the tax breaks when Dick’s opened in late April.

The city will keep 5 percent more of the sales tax revenue collected at Dick’s and Panda Express each year through the 10th year the Dick’s store is in operation.