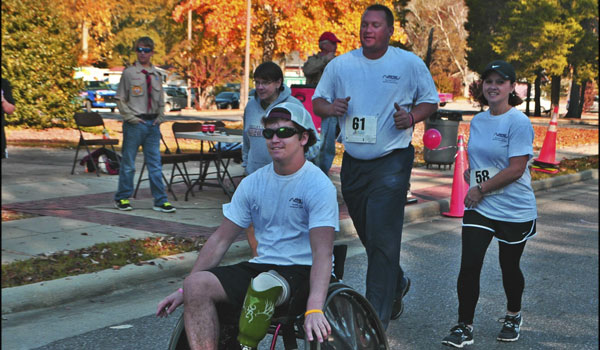 Chris Goodwin during the first annual Never Ever Give Up Race, followed by his mother and father. (Contributed)

The event was wildly successful, with over 40 runners and more than $2,000 raised for Goodwin and his family.

“At that race, people just kept asking me ‘are you going to do it again?’” McDaniel said, and she did, more than doubling the amount of participants with 175 runners and $5,000 raised for five children in need.

McDaniel, who also volunteers with the Shelby Humane Society, will be offering a special $10 discount on the registration fee for those who adopt a pet at the SCHS kick-off party on June 1.

For McDaniel, the best part of organizing the race is meeting new faces and hearing new stories.

“I’ve always had a heart for special needs kids and families,” McDaniel said. “It’s just something to help the community out.”