Drienna Wallace is a senior at Vincent High School, where she will graduate third in her class with a 3.79 GPA. She was awarded a full scholarship at Berea College in Kentucky including tuition, room and board. Her goal is to be the first in her family to graduate from college. 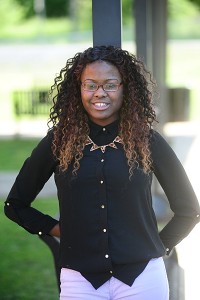 Vincent High School senior Drienna Wallace is striving to become the first in her family to graduate from college. (Reporter Photo/Jon Goering)

“Drienna is a dedicated and self-motivated student with great character and work ethic, high academic ability and strong leadership skills,” said school counselor Maite Miller. “She does everything to the best of her abilities, does it with integrity, great attitude and has accomplished much in the midst of extreme challenges.”

“Drienna has a great attitude, is a hard worker, and never lets anything stop her,” said math teacher Mary Marbut.

Wallace’s determination to never give up was tested greatly her senior year when she became pregnant. She continued with school, kept her grades up, but had to quit sports. She was determined to go on to college with her baby. Sadly, her baby died at birth.

“Life is never easy,” said Wallace. “It is our decision to get back up again. My faith and my pastor at Scotts Grove Baptist Church helped me so much during this time. I am also very close to my younger sister. She and I, along with my little brother, live with our grandmother. My goal in life is financial stability and the only way is through an education. The environment at Berea reminds me of Vincent. I want to be a nurse and hope to join the Navy after college. I ultimately want to earn a PhD in nursing.  There is no reason I can’t.”

More than 360 seniors graduated from Spain Park High School during a ceremony at the Pete Hanna Center at Samford... read more