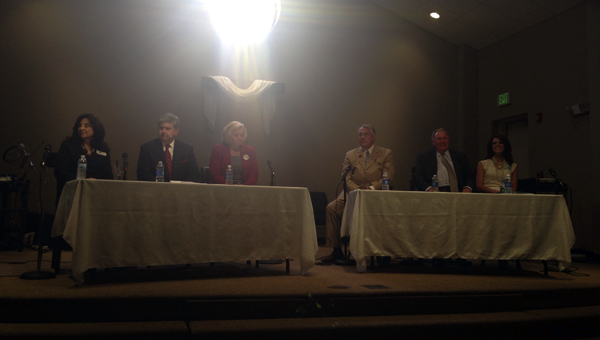 Republican candidates for Alabama House District 43 are pictured prior to the start of a candidates forum May 22 at New Hope Cumberland Presbyterian Church. (Reporter Photo/Cassandra Mickens)

The candidates found common ground on most issues, including criminal code reform and alternative sentencing programs for non-violent criminals to address state prison overcrowding, stamping out government regulations on small businesses and being accessible around the clock to constituents.

Shaver, a wife and mother of four children “living in our education system,” wants to repeal and replace Common Core, and said Alabama has “the talent, skill and ability to go back to 2010 standards that were absolutely improving the direction of schools.”

McDonald, a bankruptcy and divorce attorney who is perhaps best known for her stint on the NBC reality series “The Biggest Loser,” said the opinions about Common Core are mixed within the district, with educators lauding the standards and parents loathing the standards.

“We need to come together and develop a system in Alabama that addresses all of the issues,” McDonald said. “I don’t want to throw Common Core completely out. Let’s all take a really hard look at it and really understand Common Core … Completely throwing it out is off the table for me.”

Shaver and McDonald touted public-private partnerships to fund needed highway projects, while Clark, an optometrist and owner of Pelham Eye Care, said the state should “save money in other areas of the general fund budget so we can invest locally.”  Mooney, a commercial realtor, agreed, saying the state needs “Alabama solutions for Alabama problems; not federal solutions for Alabama problems.”

Murphy, a former state representative, former Shelby County commissioner and former mayor of Pelham, said politics should be eliminated from the Alabama Department of Transportation.

“Don’t let the governor appoint the [ALDOT] director. Let’s pick the best one that’s there and take the politics out of it. Then you can get something done,” Murphy said.

Anti-abortion activist Ciamarra countered Murphy, saying sending a longtime politician back to Montgomery will not rid ALDOT of political influence.

“I’m opposed to toll roads and public-private partnerships when people have paid taxes for roads,” she said.

Voters will cast their ballots in state and county primary elections June 3.