Holderby has her future in the net 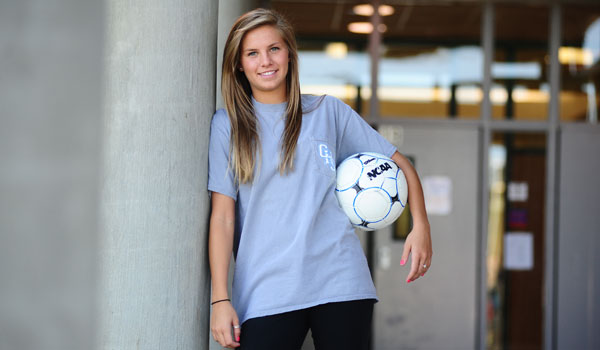 Britne Holderby has been playing soccer since she was 4 years old. It’s little wonder that the sport has been a central part of this young athlete’s life during her four years at Chelsea High School. She says her most memorable moment actually came two years ago when she was a sophomore.

“We were state 5A champs that year, and I scored the winning goal during the last three minutes of the game. It was very exciting,” she recalled. That game-winning goal was only to be the first of many athletic accomplishments for the student Chelsea High Principal Wayne Trucks calls “one of the best soccer players in the state, if not the southeast.”

Britne has also beaten the Chelsea school record with 36 goals scored in one season, was the team’s Most Valuable Player during both her junior and senior years as well as team captain for those two years.

Now, with graduation just weeks away, this Alabama girl is on her way to Penn State where she has been awarded a four-year soccer scholarship. “I don’t have any ties to Penn State and no ties up north,” said Britne, “But when I visited the school, I fell in love with the campus and the soccer program. I just knew that was the place I would fit in. It was the place for me.”

According to Trucks, “Going to Penn State is kind of like a kid from our school getting a football scholarship to Auburn or Alabama. Penn state has one of the premier soccer programs in the country.”

Though excited about her upcoming college career, Britne says she will be playing “side-by-side with girls who are already on the U.S. National Team. For me, being from Alabama where we’re not known for turning out a lot of soccer players, the idea is pretty intimidating, but it is also a motivation and an inspiration to try and set my sights on a national team.” As for any thoughts toward the Olympics, Britne says, “For me that would be a dream come true.”

What to do, what to do: summer provides free time for sports, but not for long [COLUMN]