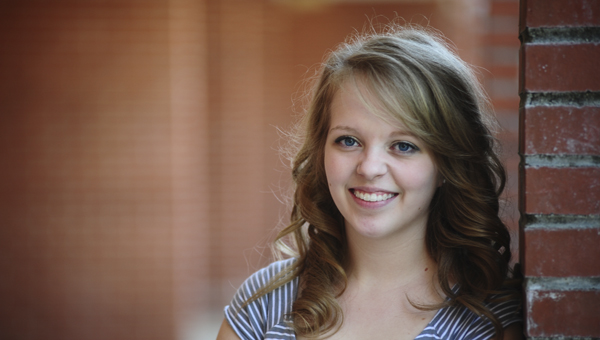 Kansas Kirk, a recent graduate of Shelby County High School and the Shelby County College and Career Center’s Health Care Program, was the valedictorian of her class with a 4.1 GPA. (Reporter Photo/Jon Goering)

The following student was selected for the 2014 Shelby County Reporter Nine Who Shine section, which recognizes excellence among this year’s high school seniors.

Kansas Kirk, daughter of Mandy and Robbie Kirk of Chelsea, is the science award winner in “Nine Who Shine.” A senior at Shelby County High School and the Shelby County College and Career Center’s Health Care Program, Kirk is valedictorian with a 4.1 GPA.

Kirk comes from a family of educators. Her mother is a College and Career Center counselor, her father teaches science at Chelsea High School, her grandfather was a school superintendent and her aunt was an assistant principal. However, the medical field has drawn Kirk’s interest.

“I was a preemie baby, as was my brother,” said Kirk. “I only weighed three pounds. I have always been fascinated with neo-natal science. I want to be a neo-natal surgeon and be a doctor who listens and cares for people.”

To pursue her interest in medicine, Kirk started at the College and Career Center in 2011, where she has the highest GPA in health care science, Spanish II and won AP chemistry award. She will receive an advanced diploma with distinction and advanced career technical endorsement. She has completed AP language and composition, AP literature and composition, AP chemistry, AP biology, AP government and economics and AP calculus.

Kirk has been active in the Health Occupation Students of America, where she has served as the state HOSA first vice president and secretary (2013-2014) as well as president of SOT’s HOSA chapter (2012-2013). She has competed at the HOSA state level where she won second in medical reading.

She won first place at Skills USA state level for medical terminology and second place for crime scene investigations as well as seventh in the nation. She has volunteered hundreds of hours in community service.

Kirk has been admitted to the Honors Program at Tulane University in New Orleans, where she was awarded the Presidential Scholarship, a renewable $25,000 four-year scholarship. She plans to pursue an education in the medical field with a minor in Spanish.