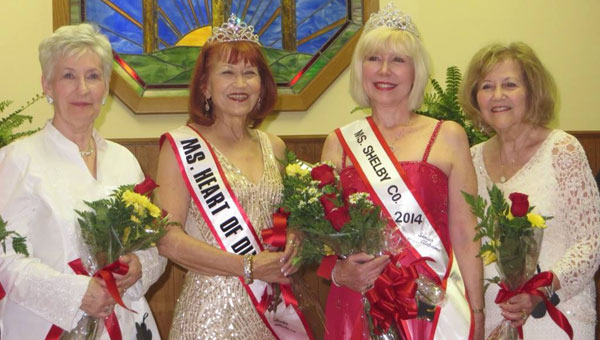 The Ms. Senior America Pageant is “the world’s first and foremost pageant to emphasize and give honor to women who have reached the ‘Age of Elegances.’ It is a search for the gracious lady who best exemplifies the dignity, maturity and inner beauty of all senior Americans. The Ms. Senior America philosophy is based upon the belief that seniors are the foundation of America, our most valuable treasure. It is upon their knowledge, experience and resources that the younger generation has the opportunity to build a better society.”

The Ms. Senior Shelby County pageant is a preliminary to the Ms. Senior Alabama Pageant, which began in 1985. It is open to women age 60 and older who perform a talent and share their personal philosophy.

This year at the Shelby County pageant, two titles were awarded, Ms. Senior Shelby County Ellen Brake of Birmingham and Ms. Heart of Dixie Edna Sealy of Shelby Shore on Lay Lake. Both women will complete for Ms. Senior Alabama on August. 9 at Wallace State Community College in Hanceville that is open to the public. First Alternate was Elise Hearn of Forest Lakes in Sterrett. There was a tie for Miss Congeniality, Brake and Rita Schwarz.

“I entered this pageant because it truly honors seniors and I am proud to be 64,” said Sealy. “Seniors fear not being useful and I wanted to share that we can contribute much to society. I am very involved with the Shelby County Arts Council and therapeutic art through its Arts Ability program. I teach art to special needs children and it brings such joy to them. I remember the day a boy was crying and the teacher asked him what was wrong. He said I am not sad, I am crying for this is the happiest day of my life. I look forward to sharing my philosophy of life as Ms. Senior Heart of Dixie.”