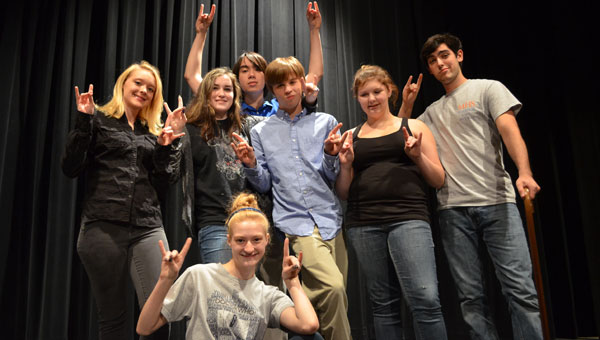 Orange team members throwing up their mascot sign as they prepare to take on the blue team in MHS’s first Culture Clash. (Contributed)

As their final project for the school year, the Montevallo Moonlight Players initiated a new tradition at the high school.

In the same vein as college night at the University of Montevallo, theatre students developed “Culture Clash,” a theatrical competition between the blue team and the orange team.

Each team had to create a dance, a cheer and a 20-minute skit to perform to the upperclassmen the last week of regular classes.

“My aim in this event was to give students the opportunity to create something of their own,” theatre teacher Mary Howard said. “Since they were responsible for the entire production, they had to consider all elements of a play. Even the dance and cheer require elements of drama. Dance can be a dramatic story-telling, and character can be used in cheer.”

Howard only helped with a few tips with scriptwriting and providing encouragement during practices, so students had to contend with the struggles of directing and motivating their groups on their own.

“I had a fabulous experience in Culture Clash,” orange team director junior Greg Spence said. “Directing is not about one person doing it all, but about finding the best people to help you do things the right way.”

Just as at college night, their presentations were judged. For this event, judges even supplied the teams with praises and criticisms based on their performances, so students know which areas need improvement.

“Although the process was difficult and we learned our teacher’s point of view with blocking and working on lines, I had fun working with our team of actors,” blue team co-leader junior Frances Pope said. “We were able to express our ideas and work together to combine those ideas and really work as a team.”

Through the Culture Clash experience, these young actors not only performed, but found success in their performance because they learned the importance of rehearsal, remaining quiet backstage and learning lines—all theatre basics.

“I’m very proud of their efforts,” Howard said. “They presented two really good skits, and the audience seemed very receptive to their work.”

This year’s competition ended in an orange victory. Look for this initial success to be tested in next year’s Culture Clash in the spring.

Members of the Peacemakers service organization with sponsor Rose D’Alessio as they prepare to serve dinner to cancer patients at... read more