Owner looking to develop property next to Saddle Lake 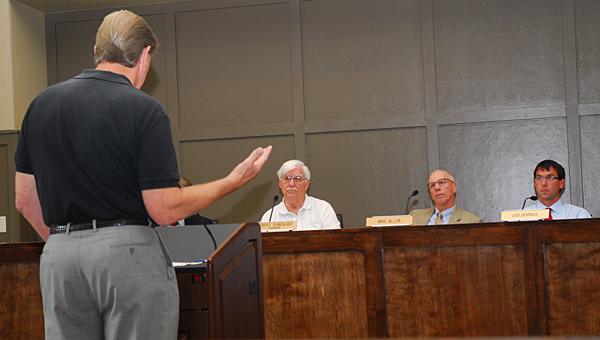 Rick Nicholson, left, speaks to members of the Alabaster Planning and Zoning Commission during its May 27 meeting at Alabaster City Hall. (Reporter Photo/Neal Wagner)

ALABASTER – The Alabaster Planning and Zoning Commission will not decide its stance on rezoning a piece of property recently annexed into the city next to the Saddle Lake Farms subdivision until August, board members announced during a May 27 meeting.

During the meeting, the commission voted unanimously to continue the rezoning request until its August 26 meeting to allow the property owner, Envirobuild, Inc., to prepare and present detailed plans for a proposed residential development on the 40-acre property.

In April, the Alabama Legislature voted to annex the 40-acre property from unincorporated Shelby County into Alabaster, paving the way for Saddle Lake to possibly annex into the city in the future.

Envirobuild, which also developed Saddle Lake Farms, is requesting the property be rezoned from municipal reserve to an R-2 zoning, which would allow for a 15,000-square-foot minimum lot size. Envirobuild representative Rick Nicholson told Planning and Zoning Board members the company is looking to one day build a residential development on the 40 acres “essentially the same thing” as the current Saddle Lake Farms subdivision.

“We don’t have the intentions at this very moment to come in and build a subdivision,” Nicholson said. “But what we envision is, it would be essentially the same thing as Saddle Lake Farms.”

Several speakers said they paid extra for lots adjacent to the pasture currently on the 40-acre property, and others expressed concerns about the density of the proposed development.

“I am vehemently against this. The pasture is next to my property. I want my property to stay as it is,” Saddle Lake resident Binnie Myles said. “I think it would be a terrible, terrible thing if our beautiful, safe, quiet community was put through this.”

Phillip Lusco said he fought to support the legislative annexation of the 40-acre tract, but claimed he was “led to believe that the zoning of the property would not change.”

Commission member Tommy Ryals said if Nicholson presented a visual plan for the possible neighborhood development, it would allow the city to enforce the plan in the future.

“My personal opinion is that I would really like to see what this is going to look like, and have some assurances that what will be built will match what is out there,” Ryals said, noting the city could enforce the plan even if another developer buys the property in the future.

The Pelham BOE five key hires to the growing Pelham City Schools staff during a May 27 meeting. (File) By... read more