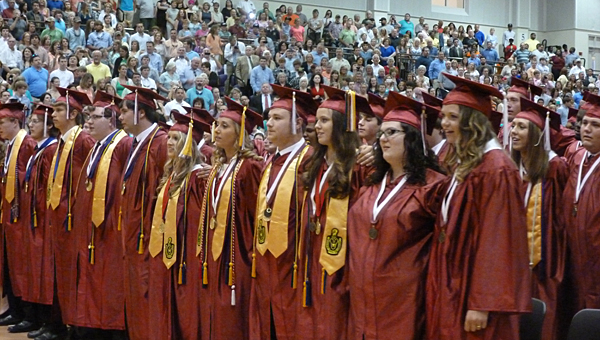 Shelby County High School held its graduation at the University of Montevallo on May 22. (Contributed)

Shelby County High School, founded in 1914, celebrated its 100th graduation at the McChesney Center at the University of Montevallo on Thursday, May 22, 2014. Known as the Wildcats with colors maroon and white, SCHS seniors received their diplomas in their maroon caps and gowns.

The valedictorian address was given by summa valedictorian Wallace Morris, who also received the Johnson-Pope Award, the highest honor given to a SCHS senior at graduation. Named for two former teachers, Myrtle Johnson and Eileen Pope, this award is given to the student who strives for excellence in academics as well as excels in leadership at SCHS.

“God has given us talents to develop and help others,” Morris said in his valedictorian speech. “Each one of you is my hero. We are an array of people who astound me, those who are the hardest workers, who are committed to service and have overcome so many obstacles. Eleanor Roosevelt said that happiness is not a goal, it is a by-product. Thank you all for being my heroes to me.”

“I am humbled to receive the Johnson-Pope Award,” said Morris after graduation. “I feel I do not deserve this more than any other student. I plan to attend Auburn University and major in computer science.”

Morris received Auburn’s Presidential, Presidential Technology and Engineering Jan and Tommy Avant Scholarships totaling $44,024, in addition to $47,800 to another university.

The service ended with the graduation tradition of the graduates transferring their tassels from the right to the left side of their cap then tossing their caps in the air as the audience cheered.