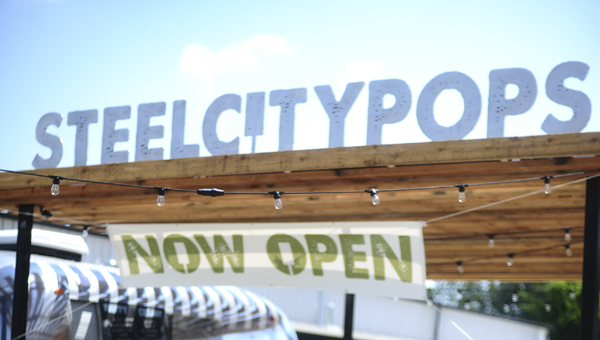 HOOVER — Steel City Pops, the all-natural frozen treat shop, opened its newest location in Hoover along U.S. 280 May 19, just in time for summer.

Housed in a shiny silver Airstream trailer, the pop shop is located next door to Vapor Thrift Store in the Lee Branch area. The Hoover shop has shaded outdoor seating for customers to enjoy their pops onsite as well as drive-thru service, said founder and owner Jim Watkins.

“It’s been gangbusters since we opened,” Watkins said. “I’ve always lived in this part of town, so it’s good for us to be close to where our friends are.”

The opening of the Hoover store coincided with Steel City Pops’ second anniversary. Watkins opened the first Steel City Pops store in Homewood in the summer of 2012, and has since opened stores at the Summit in Birmingham, The Pantry in Crestline Village in Mountain Brook and along University Boulevard in Tuscaloosa. Steel City Pops’ first out-of-state store opened in Dallas May 19, and another store is slated to open in Ft. Worth this year.

“We just started figuring out where we could grow to meet demand,” Watkins said.

Watkins said the Strawberry pop and the Buttermilk pop, a creamy cheesecake-like pop, are among the most popular flavors.  For the creamy, dairy-based pops, Watkins uses dairy products from Stone Hollow Farmstead in Harpersville. Watkins has even named one of the cows that produces the milk for the pops — Poppy.

“We try for our menu to be as balanced as possible, but we encourage you to be adventurous,” Watkins said of the flavors.

And if a customer is dissatisfied with their adventurous choice, Watkins said, he or she can select another flavor free of charge.