COLUMBIANA – A 39-year-old Trussville man will spend the next five years in prison after he pleaded guilty to selling methamphetamine in the parking lot of the Alabaster Lowe’s home improvement store in 2012. 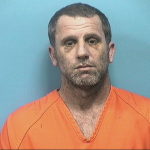 Jason Earl Fortenberry, whose address is listed in the 200 block of Glen Cross Drive in Trussville, pleaded guilty to one count of unlawful distribution of a controlled substance during a May 28 hearing at the Shelby County Courthouse.

During the hearing, Fortenberry appeared in an orange Shelby County Jail jumpsuit and wore leg and arm shackles as he entered his guilty plea. He was accompanied by his defense attorney, Barry Alvis.

While reading what prosecutors likely would have been able to prove had the case gone to trial, Alvis said Fortenberry sold methamphetamine in the Lowe’s parking lot on March 30, 2012.

Fortenberry has four previous adult convictions, and could have faced up to 20 years in prison for the charge.

Through a plea agreement, two other unlawful distribution of a controlled substance charges were dropped against Fortenberry.