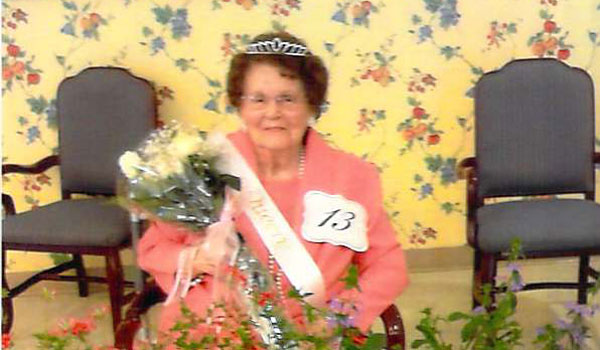 COLUMBIANA—Mildred Baldwin’s picture and plaque will soon join the wall of pageant winners at the Columbiana Health and Rehabilitation center and a colorful flower wreath with a “Queen” sash adorns her door.

“I’ve been in pageants, but I’ve never won. I won this time,” Baldwin, 93, said. “All pageants are fun, but being the winner is really fun.”

A lifelong resident of Shelby County, Baldwin was born in Chelsea in 1920. Baldwin and her older sister, Mary, sang on the radio in the 1930s, and Balwin continued to sing in church and with the Saints Alive Senior Choir from the First Baptist Church of Alabaster as well as the choral group of the Alabaster Senior Citizen Center. Baldwin still enjoys singing along with visiting groups that come to the center, her daughter Peggy Baldwin Jernigan said.

“Ms. Baldwin has lived in Shelby County all her life, and she’s done a lot for the community. She has served as a volunteer with RSVP and she is a master quilter,” Lyle said.

Baldwin has quilted over 100 quilts, which were on display at her 90th birthday party, which over 250 friends and family attended, Jernigan said.

Baldwin said her volunteer efforts throughout the years played a large part in her recent win.

“There was so much information about what I had done,” Baldwin said. “I’ve been active all through my life. I’ve been working with people, and I’ve enjoyed every bit of it.”

Balwin and her husband, Dillard Baldwin, grew and sold vegetables at the Shade Tree Curb Market for over 30 years, and she won many blue ribbons from the Shelby County Fair for her flowers.

Gesturing to a collage full of photos on her wall, Balwin emphasized that her family has been one of her greatest joys.

“Always smile and say humorous things and you’ve got it made,” Baldwin said. “Then, you’ve got the audience.”

Baldwin was one of seven contestants who competed in the Columbiana Health and Rehab Queen pageant held on May 15 at the facility on Alabama 25. Nina Griffith was first alternative, Connie Kennedy was second alternative, Elizabeth Boyle was Miss Personality, Kellie Conn won Prettiest Hair and Elizabeth Boyle and Bertie Seale were both named Miss Congeniality.