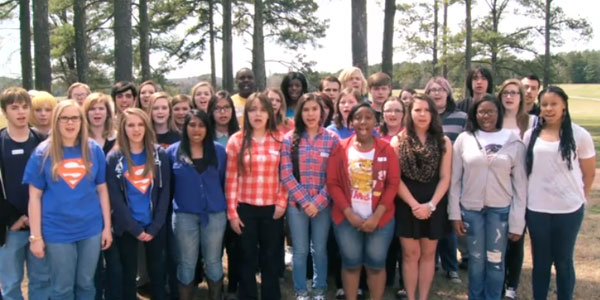 MONTEVALLO—Montevallo High School students joined the ranks of many famous Americans when they were recorded reciting the Gettysburg Address on the grounds of the American Village.

The students filmed the speech as part of an initiative in conjunction with Ken Burns’ latest documentary, The Address, where people across the nation were encouraged to submit videos reciting the speech. President Barack Obama, Martha Stewart, Usher and Bill Gates are just a few of the many famous Americans who participated in the challenge.

When Alabama Public Television Education Specialist Kathy Heiman approached Montevallo High School teachers Lee Pastor and Erma Hinton about filming their students reciting the speech at the American Village on a day they were already planning a field trip to the venue, they jumped at the opportunity.

“It was kind of a fortunate thing that happened,” Pastor said. “It was one of those things that were meant to be.”

Hinton worked with the students to ensure they understood the meaning behind the speech, the audience it was intended to reach and the historical context. She also worked with students on their diction and pronunciation.

“I think Lincoln himself would have been proud,” Hinton said of the students’ performance. “We wanted to make sure Montevallo was represented very well.”

“They were so very proud because they were part of something bigger than themselves,” Hinton said.