Busy with raising her daughter, Alyssa, Angie Lucas was not too worried when she felt a small lump in her breast two years ago.

“My first thought was to wonder how much a mammogram might cost with no insurance,” Lucas said. 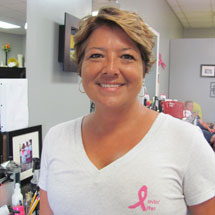 Five months later, after hoping the lump would go away (it didn’t – it grew), Lucas confided in one of her friends. After having a mammogram and ultra-sound the doctor urged Lucas to have a biopsy but she wanted no bad news before Christmas.

From Dec. 12 until Jan. 2, a waiting game played out and on Jan. 9, Lucas was diagnosed with invasive ductal carcinoma. She promised everyone she would be strong, fight it and win. As a single parent, her daughter was her number one priority.

“The day of my surgery, the doctor removed lymph nodes from my underarms and they came back free of cancer,” “Lucas said. “When I got back to my room after a six-hour surgery, everyone was happy and I thought they were crazy until they got me to understand that the cancer was contained to my breast. I recovered from surgery and a month later, had my first round of four chemotherapy treatments. Fortunately, I did not have to do radiation and I know that I am blessed to have to only do four treatments, others have had to go through so much more.”

According to Lucas, coming to grips with the fact that she had no control over what happened led her to know that what she had to do was give it all to God. Breast cancer renewed her faith in the Lord, in the power of prayer and brought friends back into her life that she had not seen in years.

“I hope that my future holds many more years to be with Alyssa and watch her grow into a beautiful woman. I know all cancer cases are different but if I can give any advice it would be to stay positive and trust God,” Lucas said. “Oh, and did I mention, laughing a lot really helps!”

Lucas is a 1989 graduate of THS and is employed at Cuts ‘n Such using both her barbering and cosmetology skills.

Davis lives life to the fullest