Farmer’s market kicks off in Montevallo 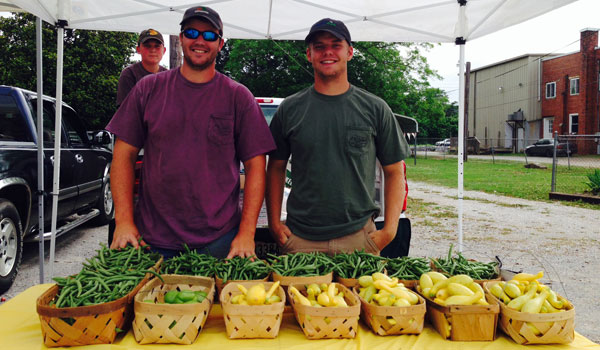 Trey Colley and Zack Smith in front of their remaining produce at the first farmer’s market of the season in Montevallo. (Ginny Cooper/Reporter photo)

MONTEVALLO—Despite slightly overcast weather, Montevallo’s first farmer’s market of the season was busy before it even officially opened.

“We were getting bombarded at 10 minutes till three,” Arlene Peters with G and G farms said, and within the first hour the stand was sold out of blackberries, strawberries, okra and kale.

“We had in excess of 100 within the first hour,” Montevallo Chamber of Commerce Executive Director Steve Gilbert said.

Seven vendors attended the farmers market, but Gilbert said many vendors are waiting for their produce to be ready, and “just didn’t make it this week.”

Smith Farms, a local farm in Montevallo, also sold out of produce quickly and within an hour “about three-fourths” of their stock was sold out, including cantelope, seedless watermelon and cucumbers.

“We’re doing way better than expected,” said Harry Hale of Burnette Farms, who attended the market for the first time with his son Wesley, and sold Chilton County peaches and other produce.

Though many of the vendors were Alabama farmers, other products were available at the market as well.

The Montevallo farmer’s market will be open on Mondays from June 2 until August 18 from 3-6 p.m. at 660 Main Street.

By NEAL WAGNER / Managing Editor A 43-year-old Maylene man has been indicted on a charge of allegedly causing “debilitating”... read more