HIS inventors take on Shark Tank 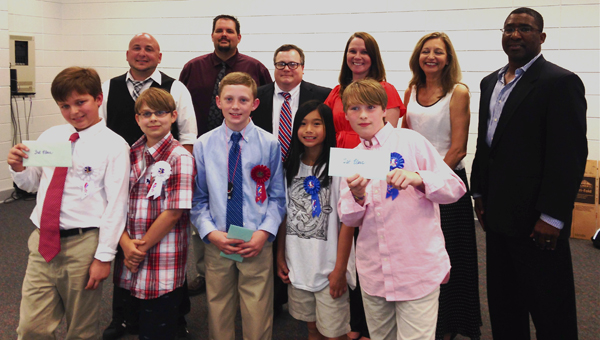 Winning inventors of Helena Intermediate School’s Shark Tank posed with the local business leaders who judged the competition on May 20. (Contributed)

The May 20 presentation marked the culmination of an in-depth inventing project Shelli Abernathy’s fifth grade gifted resource class had worked on. Students learned to observe their environment and identify problems around them through keeping an inventor’s journal.

“Being aware is one of the key tools for an inventor or a problem solver,” Abernathy said.

Students then paired up to create an original invention that “actually worked and solved the problem” and “makes life more convenient, easy, fun or safe,” Abernathy explained.

The students came up with a plethora of diverse inventions, from a tornado safety helmet complete with hands-free whistle and flashlight to a backpack umbrella.

However, this project was about more than inventions. It prepared the students for “the real world” by hands-on public speaking experience and developing their “presence in front of others,” Abernathy explained.

Of the 40 entries, 10 were chosen to participate in the Shark Tank event. Like the television show the presentation was based off of, the 10 teams created business plans to present with their inventions to a group of local business leaders, including a local councilman, a central office person and a local attorney, to name a few.

“It’s real world experience with real world people,” Abernathy said of the event, adding it also put the students under “a little pressure.”

Although only three teams were chosen as winners, all were celebrated with a business reception following the presentations.

“I always do a huge event with my fifth graders,” Abernathy said. “(It) celebrates all they’ve done.”

This is professional golfer Kenny Perry. He captured the 2014 Regions Tradition championship, held at Shoal Creek May 18. After... read more