The Lay Lake Home Owners and Boat Owners Association is comprised of over 400 families who are committed to keep the lake a clean and safe environment for all its inhabitants: Human, fish, birds and all wildlife. 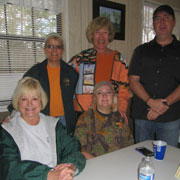 Lay Lake, which borders five counties Shelby, Chilton, Talladega, St. Clair and Coosa, covers 12,000 acres with a shoreline of 289 miles. The lake was formed in 1914 when Lay Dam impounded the Coosa River, one of the earliest concrete dams built in the United States. Named for the first president of Alabama Power, Captain William Patrick Lay, the dam was the first hydroelectric plant built by Alabama Power Company.

HOBO provides many services to its members and for the lake. Cleanup Chair Judy Jones and Alabama Power representatives organize the massive annual cleanup each April when volunteers spend a week cleaning trash out of the lake. John Hicks and Wayne Horton are building six osprey nest platforms. Joe Sullivan organizes the annual Christmas Boat Parade. The Coast Guard Auxiliary Flotilla 88 patrols the lake for safety and HOBO publishes a bi-yearly newsletter.

Recently HOBO sponsored a water monitoring workshop in Shelby Shores, where volunteers received training from Patti Hurley of Alabama Department of Environmental Management and Taylor Steele from the Birmingham Botanical Gardens. Jones organized and catered the event. Hurley created the Alabama Water Watch with Auburn University in 1989. Volunteers test sediment levels, turbidity, pH and levels of dissolved oxygen. The monitoring results are published for the public at Alabamawaterwatch.org.