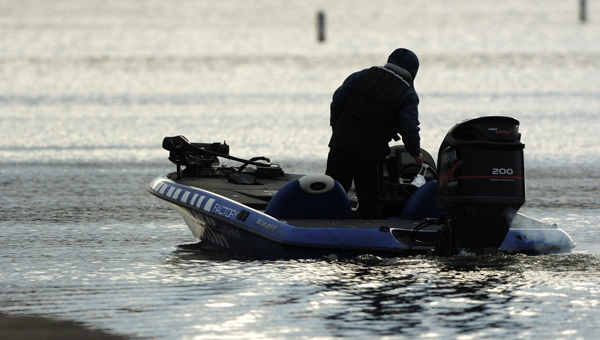 The fight for fish will come to Columbiana as the Alabama Bass Trail will make its penultimate stop on the 2014 tour at Lay Lake on June 7. (FILE)

COLUMBIANA — The fight for fish will come to Columbiana as the Alabama Bass Trail will make its penultimate stop on the 2014 tour at Lay Lake on June 7.

The trail, which features some of the top in-state and out-of-state anglers, visits lakes across the state.

“We’re the first state to endorse a bass trail,” Kay Donaldson, program director for the ABT, said. “We were endorsed by Gov. Bentley. (He) brought the idea of a fishing tournament to show the economic impact (they have).”

Lay Lake makes up one of 11 stops for the tour, which Donaldson said was designed to pit the best Alabama bass anglers against the best from out of state.

“The bass trail started off the Robert Trent Jones Golf Trail,” she said. “It’s dedicated to bringing out of state anglers, showcasing the state as a year-round fishing destination.”

Donaldson went on to say that Lay Lake stood out among the others due to its history as having strong bass fishing competitions, among other perks.

“The fact it’s been home to (the) Bassmaster Classic was a huge mark on its resume,” she said. “Coosa River bass are fun to catch. (Lay Lake has) good infrastructure for anglers. The fact it is a very storied lake (helps).”

While the fact the event is part of a season-long tour and will pay a $10,000 prize to the winner, Donaldson encouraged all anglers with a boat to sign up, stating that members of the FLW tour and Bassmaster Elite tour were not allowed to participate in the event.

The cost to enter is $250 per boat, and entries must be received by 12 a.m. June 5. Donaldson said 150 boats had already entered, with most stops on the trail hosting around 160 boats.

She also said spectators were welcome to come witness the weigh-in at Paradise Point at 2 p.m.

“We encourage (them) to bring their lawn chairs,” she said.