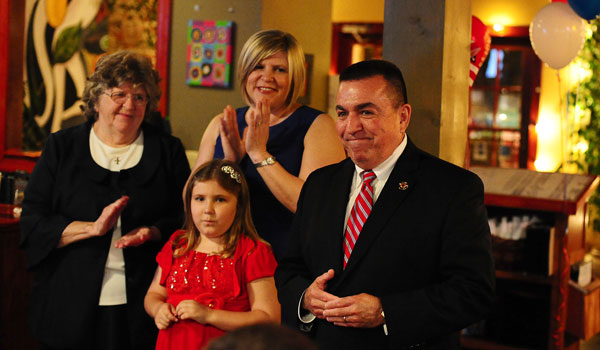 John Samaniego with his family after his win in the June 3 elections. (Jon Goering/For the Reporter)

COLUMBIANA—John Samaniego has won the Republican primary nomination for Shelby County Sheriff with 55.41 percent of the votes.

The Democratic Party did not have a candidate qualify for the race before the cutoff, but Ken Bailey is seeking to be added to the ballot for the general election.

Samaniego, who served as chief deputy sheriff of the Shelby County Sheriff’s Office for over 12 years, said he has “no drastic changes” planned for the administration following the election.

“Having been chief deputy for almost 12 years, I helped design and build the current administration,” Samaniego said. “We will continue to provide services to the citizens at the level we can afford.”

Samaniego said the philosophy of his administration will be that the “citizen is the consumer and we (the sheriff’s department) are the service providers.”

School security and “dealing with the drug problem” are two pressing issues Samaniego plans to address.

In addition these issues, Samaniego said he “sincerely hopes to repair the relationship between the county commission and the sheriff’s office that has been strained as of late.”

Chris Curry, who is currently the sheriff in Shelby County, is “very excited” about the results tonight.

“John has been a great leader and a great servant to the citizens. I couldn’t be more pleased that the citizens recognize that,” Curry said.

Larry McDow, who received approximately six percent of the votes, said he has no specific plans following the election.

Kip Cole, who received about 20 percent of the vote, said he believe Samaniego will make an excellent sheriff.

“We gave it a hard run, and sheriff elect Samaniego is a great man, he’s a worthy opponent,” Cole said.

Calls to Rick Needham, who received approximately 18 percent of the vote, were not immediately returned.

Samaniego reflected on his 12 years as chief deputy and said he was looking forward to his time as sheriff.