Galloway hoping to ‘cover’ the competition 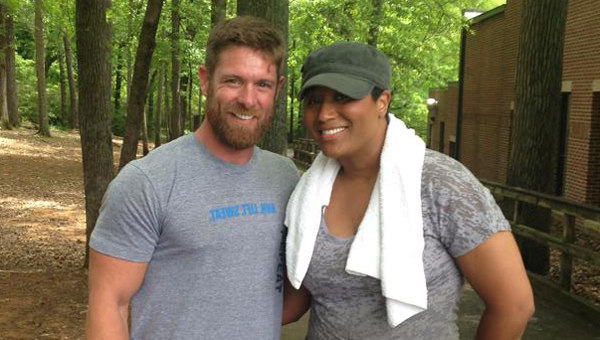 Alabaster YMCA trainer and fitness enthusiast Noah Galloway, left, has entered a contest put on by the magazine in a partnership with Kenneth Cole to find the “Ultimate Men’s Health Guy,” to appear on the cover of the magazine. (Contributed)

ALABASTER — For Alabaster YMCA trainer and fitness enthusiast Noah Galloway, life has been about meeting — and exceeding — goals.

Participating in the 2012 Marine Corps Marathon, three Warrior Dashes, more than a half-dozen Tough Mudder races and multiple 5k and 10k events, in addition to serving in the 101st Airborne Division of the U.S. Army have led Galloway to his newest quest: Appearing on the cover of Men’s Health magazine.

Galloway has entered a contest put on by the magazine in a partnership with Kenneth Cole to find the “Ultimate Men’s Health Guy,” to appear on the cover of the magazine.

Galloway said he was amazed at the support he received.

“I came in kind of late,” Galloway said. “A friend mentioned it, and I forgot about it. I posted a pic and answered some essay questions. Within 24 hours, I was in the top three.”

While Galloway has accomplished a great deal in his life, he admitted he had some setbacks in his past. Galloway dropped out of UAB in the fall of 2001 following the September 11, 2001 attacks and joined the army. He fought in the initial strike of Operation Iraqi Freedom in 2003, and was redeployed in 2005.

“I learned so much,” he said of his tenure with the Army.

In December 2005, three months after being redeployed, Galloway lost his left arm and left leg in an improvised electronic device explosion in Yusafiah, Iraq. He was rushed to Germany for treatment and later Walter Reed in Washington, D.C., and woke up on Christmas Eve to find his life had been changed.

Galloway said the news wasn’t easy to take at first.

“I struggled with it the first couple of years,” he said. “I drank a lot.”

In time, however, Galloway said he knew he had to make a change, and began researching way to work out the left side of his body to make his limbs as strong as possible. Galloway said he figured out a way using an ankle strap to be able to use weight machines.

“I decided to get back into shape,” he said. “I started running races. I needed to make sure my left side was as strong as it could be. The first ankle strap was Velcro, and (the left side) got to be so strong, it broke (the strap).

As he got stronger, he began to compete in various races and fitness competitions. In time, he also started to work as a personal trainer.

“I’ve run two marathons,” he said. “I’ve done everything I can to push myself mentally and physically. I did it to prove something to myself.”

Galloway, now in first place in the competition by more than 10,000 votes, credited friends such as Pittsburgh Steelers player Ben Roethlisberger for getting the word out.

“It’s me and two other guys (in the top three),” he said. “They’re both great guys. I’m hoping to open a lot of doors. I’m not in it to get rich. I love fitness, but I also have a family, (and I’m) hoping to open doors to help make a business.”

To vote in the competition, visit Galloway’s Facebook fan page, or visit Menshealth.com.

The fight for fish will come to Columbiana as the Alabama Bass Trail will make its penultimate stop on the... read more