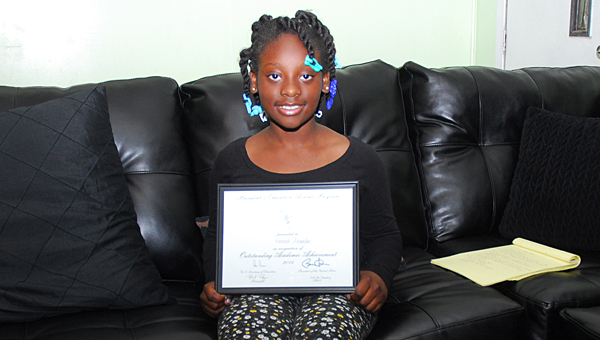 Tasha Alexander immediately began crying when her daughter, Kennadi, showed her the award she received from the White House in early May.

“I got home from work that day, and the kids ran up and said ‘Mommy, mommy, look what Kennadi got at school today,’” Tasha Alexander said during a June 5 interview at the family’s house off Simmsville Road in Alabaster. “When I saw it, I just started crying. I am so proud of her.”

As a result, Kennadi brought home a certificate signed by President Barack Obama, the U.S. secretary of education and CVES Principal Brent Byars. She also received a congratulatory letter signed by the president.

“I am proud of you for pushing yourself academically, and I am counting on you to continue to set a good example and help others whenever you have the opportunity,” read a portion of the letter. “And as long as you continue to stay focused on your education and work hard, no dream will be beyond reach.”

Kennadi is a cheerleader for Alabaster youth sports, is involved with Kids First Awareness Community Center, has always received As and Bs on her report cards and “always has a book in her hands,” her mother said.

“I think when I got it, I was surprised because I wasn’t expecting it,” Kennadi said with a smile on her face, noting math is her favorite subject in school. “It’s my favorite, because you get to learn new things like division and multiplication.”

CVES has also recognized another one of Kennadi’s traits.

“She has also been named Miss Responsibility at school,” Tasha Alexander said. “I work two jobs. I work really hard to support my children, and I’m not able to be around them as much as I’d like.

“She does what she’s supposed to every day. She always studies and gets her homework done,” Tasha Alexander added.

High achievement runs in the Alexander family, as Tasha’s sons – 13-year-old Cardell and 6-year-old Jayden – have also been recognized at school.

“My oldest son (Cardell) received an award for choir. He has a beautiful voice,” Tasha Alexander said. “And my youngest son received an art award. He’s very artistic.

“I’ve bought little holders so I can display all their awards here in the house,” she said.

The IDB voted to disband during a June 4 meeting, making way for the CDA to take its place. (File)... read more