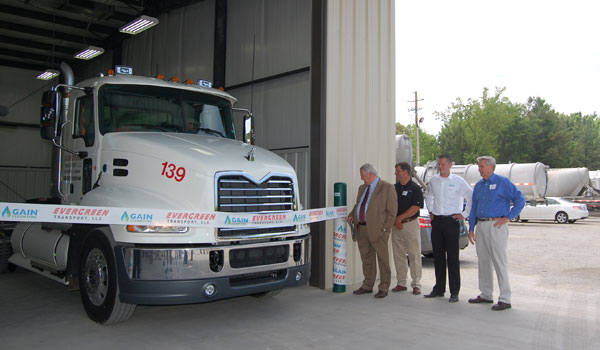 Government and company officials look on as an Evergreen transport vehicle cuts the ribbon at the grand opening of the Gain Clean Fuel compressed natural gas station. (Ginny Cooper/For the Reporter)

CALERA—City and state officials looked on as a transport truck tore through the ribbon at the grand opening of a Gain Clean Fuel compressed natural gas station at an Evergreen Transport fueling and maintenance facility in Calera.

“We’re thrilled to be celebrating the grand opening of this Gain station,” Calera Mayor Jon Graham said in a statement. “Congratulations to Evergreen for utilizing this domestically produced and cleaner burning alternative fuel. Projects like these have a positive economic impact. It’s good for business and it’s good for the state.”

“It takes courage and vision to make big changes in business,” Hill said. “This is truly a great day.”

Mark Bentley, executive director of the Alabama Clean Fuels Coalition, said the project will reduce dependence on foreign oil and is a “shining example” of how to achieve an objective.

Evergreen transport currently has 12 trucks, which run on CNG. These trucks will save the company approximately 225,000 gallons of diesel fuel a year, according to Evergreen Transport president David Wildberger. The company plans to add at least 20 more CNG transport vehicles to the fleet in the next two years.

Evergreen Transport is the first for-hire carrier in Alabama to make the conversion to CNG.