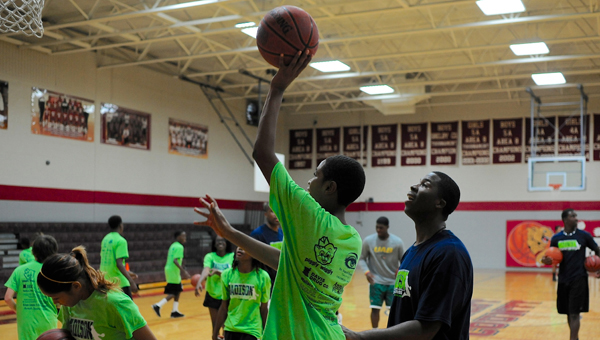 Campers and counselors, including Bobby Madison, work together at the Bobby Madison Basketball Camp in Columbiana on June 28, 2013. The camp returns to Columbiana June 23. (FILE)

The camp is scheduled for June 23-27, and will be held at the Charles Dickinson Gymansium on the campus of Shelby County High School. It offers kids age 6-17 the chance to learn the fundamentals of the sport of basketball, while receiving instruction from players with local ties.

Madison, who played collegiately for the Western Michigan University Broncos and professionally in Europe, said he got the idea from watching several camps fail to teach players the basics of the game.

I worked a lot of camps,” he said. “I kind of felt like I was babysitting.”

Madison said he promised those who attend his camp will learn the proper skills needed to be successful at the game.

“(It’s) a week of fundamental skills training,” he said. “(It’s) my way of giving basketball training in the community.”

“We’ll have different folks coming in,” he said. “We breakdown into five-to-six groups, starting with ball handling. Then we got to defense, the shooting stations (and) we do passing. At the end of the day we try to break it down while scrimmaging.”

Madison said the camp has averaged 150-175 in previous years, and that this year looks to have the same amount of interest growing.

He went on to say that in addition to fundamental basketball skills, the camp tried to teach attitude as well.

“It’s not just basketball,” he said. “We try to teach sportsmanship and life skills.”

Registration will be June 14 from 8 a.m.-noon, and the cost of the camp is $75 per camper. Fore more information, contact Madison at bobbymadisonbasketball@yahoo.com.

University of Montevallo standout Will Fulmer was taken by the New York Mets in the 22nd round of the draft.... read more