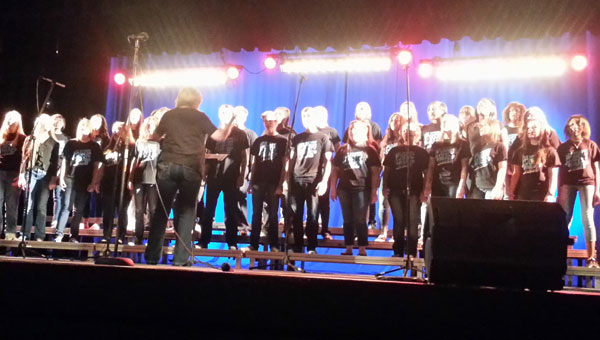 “‘Decades’ was the brainchild of the choral department students,” said second-year director of choirs at Chelsea High School, Kay Dick. “Last summer, student leaders asked if they could produce a show based across time periods and musical genres with music that would appeal to all ages.”

“It was so much fun!” senior chamber choir member Rachel Smith said with a huge smile.  “It was a tremendous amount of work, but extremely rewarding. Choir has been like a family to me.”

“Students chose and voted on the song choices, musical arrangements, choreography and costuming,” said Dick. “It was put on entirely by students, especially the officers of each choir. They rehearsed the groups and took responsibility for making sure the show was a success.”

“I am the president of the Con Brio Choir,” said senior Mary Padgett. “That is our boy-girl choir. We had three choirs for the performance, Chamber Choir, Concert Choir and Con Brio. This was our first year with Con Brio, and I’m really going to miss it.”

“I’m so pumped,” said Jada Foster after the performance. “I sang with Abigail Barnett in ‘Bella’s Finals,’ a song from the movie Pitch Perfect. I was so nervous, everyone gets nervous, but I just love singing.”

“Yeah, you get that adrenaline rush going and you get all into it,” echoed Barnett. “Performing is great.”

“One of our goals this year was to insure the health of our program by our number of participants,” said Dick. “We succeeded because we concentrated on entertaining to attract students who share our love of performing.”

“This was my first year with choir,” said senior PJ Padgett. “I started at the bottom but I’ve really improved. I have Mrs. Dick to thank for that.”

“I am going on to Jeff State in culinary arts,” said senior soloist Hannah Vickers. “I hope to eventually open a restaurant with musical performances and maybe an open-mic night. I plan to keep music as a part of my life.”

“As a teacher, my greatest joy is to see students take an idea and run with it,” said Dick. “They did that and more. I couldn’t be prouder.”

The Start of the Survivor Lap at the Chelsea Relay for life event: “It’s all about the Survivors,” Casey Morris,... read more