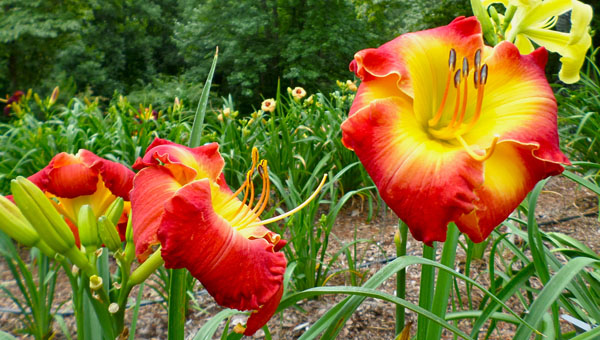 HELENA—Set back from South Shades Crest Road, down a driveway and through a gate lies Helena’s own secret garden, the Dancing Daylily Garden. Open during the peak of lily season, the garden carries daylilies in thousands of colors and varieties.

Master gardener Becky Parr opened Dancing Daylily Garden five years ago, but she has been growing daylilies for more than 15 years. Her garden has grown to fill 15 flowerbeds with more than 1,400 varieties of daylilies, including Parr’s own unique variety, the Matha Lou Garner, named for her mother.

“Sometimes I buy them for the name,” Parr admitted.

Her garden contains flowers with names such as “cotton candy crimper,” “little red dragon” and “candied popcorn perfection,” and is divided into themes, including a University of Alabama section and an Auburn University section.

The lilies’ buds begin to open in the early morning and close by the end of the day. Each bud blooms one day at a time, and each bloom lasts one day, however a plant may have 30 to 40 buds on it, Parr explained. There is also a possibility of re-bloom, Parr said, adding some of her plants have re-bloomed in October.

“The first thing I do when I come out every morning is take pictures,” Parr said, adding she has thousands of pictures of her lilies that she regularly uploads to the garden’s website.

As her collection of lilies has grown, so has Parr’s business. She regularly welcomes gardening groups to Dancing Daylily Garden and has a thriving online cliental, with customers from as far away as Wisconsin and Utah.

“I’ve shipped all over the country,” Parr said. “I’m the bookkeeper, webmaster and weeder.”

Not only are lilies Parr’s business, they have personal meaning in her life as well.

“My husband and I met at a dance,” Parr said, they began talking and connected over daylilies. “We have been married a little over five years. There’s a saying, ‘you come for the flowers and stay for the people.’”

Matthew Creighton, a former gambling addict and state trooper, will be speaking at the Alabama Youth Home in Wilsonville on... read more