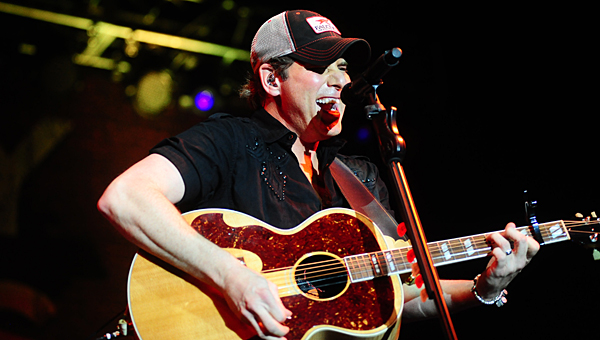 ALABASTER – Attendance numbers at Alabaster’s 12th-annual CityFest on June 7 at least matched previous years, as thousands braved sweltering heat to enjoy a gamut of entertainment offerings, according to the event’s organizers.

During a June 9 interview, Alabaster Arts Council President Adam Moseley said he hadn’t yet received attendance estimates from the Alabaster Police Department, but said it was a “darn good turnout.”

Temperatures hovered around 90 degrees by mid-morning, but a wave of thunderstorms held off until the event’s final musical act – country music star Rodney Atkins – had left the stage, Moseley said.

“Luckily, the weather held out until most folks had gotten back to their cars,” Moseley said. “The timing was pretty good.”

However, heavy rains on the night before the festival caused delays for crews working to set up the event’s main stage and other infrastructure, Moseley said the morning of CityFest.

Moseley praised the event’s volunteers and setup crews for working hard to ensure everything was ready to go by the time visitors started arriving on June 7.

Shortly after CityFest opened at 9 a.m., hundreds of visitors started rolling in – many of who rushed to stake a good spot in front of the festival’s main stage.

The Alabaster CityFest has been Shelby County’s largest festival for several years. In 2013, more than 55,000 people attended the event, and more than 70,000 have attended in past years, according to police estimates.

In addition to musical performances by bands such as Fuel and 2Blu and the Lucky Stiffs, CityFest also included hundreds of vendors, family entertainment, a cruise-in car show and a child-friendly KidsFest area.

Visitors lined up throughout the day for a chance to douse city leaders and sports coaches – such as Mayor Marty Handlon and Thompson High School wrestling coach Shawn Weltzin – in a dunking booth to raise money for an upcoming Alabaster United Methodist Church mission trip.

This year also marked the return of the CityFest 5K Fun Run, which was held for the first time the morning of the 2013 festival.

Campers and counselors, including Bobby Madison, work together at the Bobby Madison Basketball Camp in Columbiana on June 28, 2013.... read more