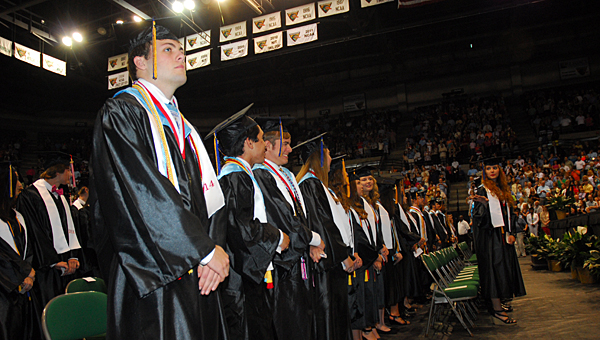 The Alabaster School System will continue to have multiple valedictorians and salutatorians during upcoming school years. (File)

ALABASTER – Thompson High School will continue to have multiple valedictorians and salutatorians for the coming school years, city Board of Education members announced during a June 9 meeting.

The School Board voted unanimously during the meeting to approve a policy allowing the continuation of multiple valedictorians and salutatorians at the high school.

THS currently has a similar policy in place, but Alabaster School Superintendent Dr. Wayne Vickers said the Shelby County School System recently decided to allow only one valedictorian and salutatorian per school beginning with the upcoming school year.

ACS Coordinator of Curriculum and Instruction Cena Davis said the valedictorian with the highest GPA will still speak at the school’s graduation.

“The main reason we wanted to consider this is because it opens up scholarship opportunities for our students,” Davis said. “We feel that if they earned that distinction, they deserve to be recognized.”

“I think if you can make a 4.0 or higher, you deserve some kind of distinction,” School Board President Adam Moseley said.