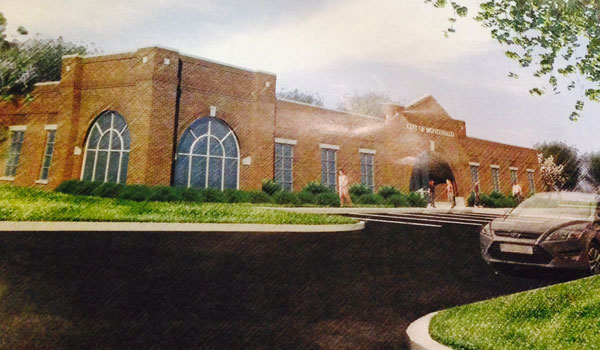 Montevallo city council members approved a motion to get architectural drawings and put the plan out to bid for a new City Hall during their June 9 meeting. (Ginny Cooper/For the Reporter)

MONTEVALLO—Montevallo city council members voted to get architectural drawings for a potential new City Hall and put the plan out to bid at their June 9 city council meeting.

“This is the first step,” Montevallo mayor Holly Cost said. “I’m hoping we’ll get to be where we need to be from this.”

“I feel like we’re stretching with this,” Woodham said. “I love the look and feel of (the building), I’m just concerned with the money side of it.”

TurnerBatson Architects designed plans for the new building, which will be built in the lot next to the existing City Hall. According to architectural drawings, the new building will be 7,892 square feet with room for both the police department and City Hall.

The current drawings are the 11th version designed by the firm for the city, and are “very conservative,” according to architect David Reese.

“(The building) is brick with characteristics of present downtown streetscape vernacular,” Reese said, and will cost approximately $1.17 million.

The current City Hall will be demolished.

Security and funding were two primary concerns of the council. Montevallo Chief of Police Jeremy Littleton said the current plans would meet the needs of the police department with “room to grow.”

All doors in the new City Hall can be locked and “the public will not have easy access to offices as they do now,” Cost said, citing security issues in the current building.

“It’s doable with enough funds remaining to address any needs we have in the future,” Cost said. “We don’t want to deplete all of our resources.”

Alabaster will demolish a foundation off Forest Parkway after it was deemed a danger to local children. (File) By NEAL... read more