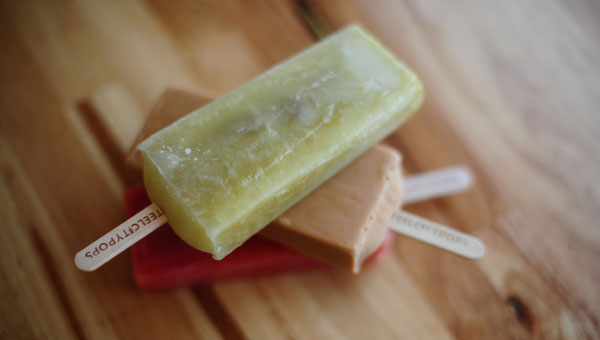 I love food. Probably more than I should. I’m sure many of you can identify with this.

So imagine my excitement last month when Steel City Pops, the all-natural frozen treat shop that started in Homewood in the summer of 2012, opened its newest location along U.S. 280 in Shelby County.

If you haven’t heard, Steel City Pops has gained a loyal following for its selection of fruity and creamy pops sweetened with raw, organic cane sugar. Selections include traditional flavors like Chocolate and Vanilla Bean, and not-so-traditional flavors like Blood Orange, Pineapple Jalapeno, and Blueberry Basil (one of two personal favorites).

My other personal favorite is the Buttermilk pop, whose taste is likened to that of a cheesecake. I was skeptical about trying the Buttermilk pop, but Steel City Pops founder and owner Jim Watkins is a master persuader. I’m glad he nudged me to live a little.

Creamy, sweet and satisfying, the Buttermilk pop is “the South on a stick,” or so I told Watkins after tasting it. Another cool tidbit: Steel City Pops’ creamy, dairy-based pops are made with dairy products from Stone Hollow Farmstead in Harpersville.

I highly recommend you visit Steel City Pops some time this summer. And this fall, be sure the try out Chicken Salad Chick, which announced plans to open a location at the Village at Lee Branch shopping center off U.S. 280 in early September.

Known for its famous 15 chicken salads, Chicken Salad Chick also serves soups, side salads and desserts. Many expressed their excitement on social media about Steel City Pops and Chicken Salad Chick’s moves to the county. Because what’s better than enjoying great food with friends and family? Not a whole lot.