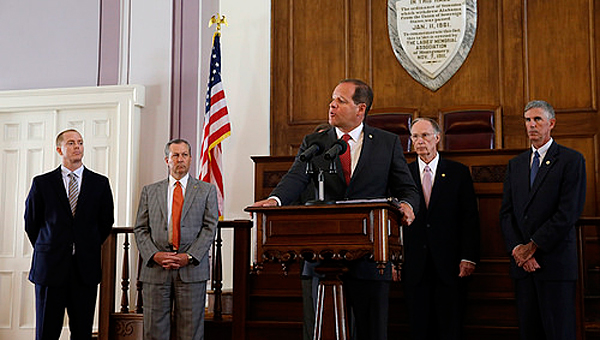 State Sen. Cam Ward, center, R-Alabaster, is introduced as the chairman of the state’s task force on prison reform. (Contributed)

If Alabama does not find a way to reduce overcrowding in its prison system, it could bankrupt the state, according to state Sen. Cam Ward, R-Alabaster.

“It will cost our state so much money if the federal government steps in and handles it for us,” Ward said during a June 11 interview. “I believe Alabama can fix this a lot better than the federal courts can.”

The Task Force is made up of a panel of government, law enforcement officials, victims’ advocates and policy makers from both political parties. The Task Force will look at ways to reduce the number of nonviolent inmates coming to the state’s prisons, Ward said.

“It is well known that the Alabama prison system is financially strained and overcrowded. If we don’t go through this process to reform and re-invest in the system, the federal government will come in and mandate we release inmates,” Ward wrote in a press release. “We must push our work to answer three essential questions: How to cut crime, how to lower victimization and how to reduce recidivism?”

The Council of State Governments, a part of The Pew Charitable Trusts, is providing free assistance to the state through its Justice Reinvestment Initiative. The council has been gathering information throughout Alabama for the last few months, and presented its findings to the Joint Task Force on June 10.

The justice center has worked with 18 states already. Last year, the organization helped to address prison problems in Michigan and Idaho, where a sweeping reform bill was recently signed into law.

Montevallo teen McKenzie Hamby has raised approximately $27,000 for diabetes research since her diagnosis in 2007. (Contributed) By GINNY COOPER... read more