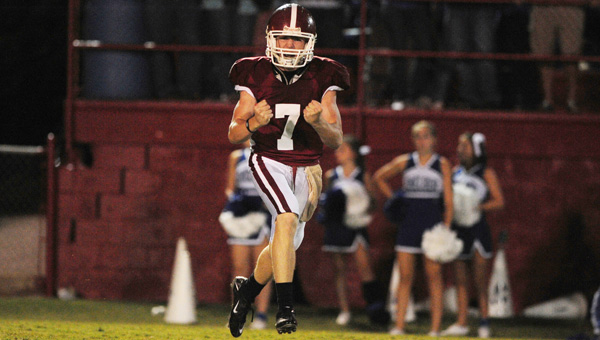 After a few twists and turns during the spring workout season, the Shelby County Wildcats football team looks to have a smoother — and simpler — summer. (FILE)

COLUMBIANA — After a few twists and turns during the spring workout season, the Shelby County Wildcats football team looks to have a smoother — and simpler — summer.

The Wildcats head into the summer under first year coach Heath Childers. Childers took over in April after former head coach Brent Smith and the school parted ways, and said his first order of business was to try and teach his philosophy to the team.

“We had a real productive spring,” he said. “There was a lot of learning to be done. The kids responded real well.”

The Wildcats ran a spread offense during the 2013 season, and Childers said the team would revert back to a more run-based offense in 2014.

In addition to revamping the offensive philosophy of the team, Childers said he aimed to change up the defensive line up as well.

“We were predominantly a three-man front last year,” he said. “We’re going to run a (four-man) front. There’s less open space. It solidifies the defense up front. You cover the linebackers up more and give (them) chances (to make plays).”

While installing a new offensive and defensive package is a lot for players to take in, Childers said he was proud of the effort the players have given.

“I think the offensive line made huge strides,” he said. “(They) got a lot better. We really simplified the offense. I was impressed with our secondary (and) linebacker play.”

The Wildcats are a long way from being ready to take the field for a game, but Childers said he saw progress made during the spring workouts.

“The main thing is to get them to understand the things they need to be successful,” he said. “The run game had a huge boost, (and) the running backs got more confidence. Tanner Carter was hurt all last year, he stepped up at safety. Austin Tolleson (improved) at running back.”

The Wildcats will kick off their season Aug. 29 by hosting the new Helena High School.

Montevallo, Thompson square off in 7-on-7 drills

The two schools faced each other in a 7-on-7 drill, renewing a rivalry from years past while tweaking their passing... read more