A good year for the grapes: Lewis Lakes Vineyards celebrates their first season 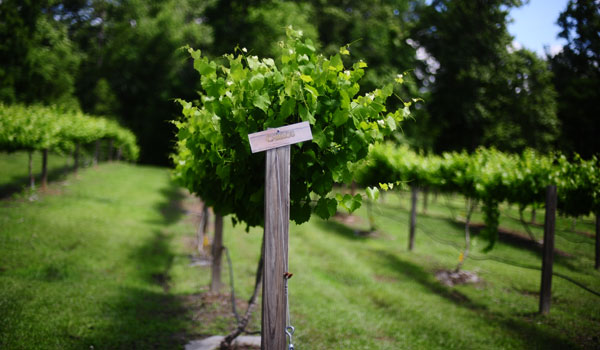 The Carlos muscadine is used to produce the Lakeside White, a dry table wine. (Jon Goering/For the Reporter)

COLUMBIANA—The newest Alabama winery is a family operation, right down to the name of the joint—Lewis Lakes Winery, which gets its moniker from the two picturesque lakes on the property named for proprietor Bill Lewis’ wife, Bonnie (“she’s the love of my life,” he stressed) and daughter, Michelle.

Lewis Lakes is also the smallest of the six vineyards on the Shelby County Area Wine Trail—which stretches from Bryant Vineyard on Logan Martin to Hidden Meadow Vineyard in Jemison—located on a quiet, 60-acre farm just north of downtown Columbiana.

Lewis Lakes Vineyards currently bottles four varieties of wine: Lakeside White, a dry table wine similar in taste to a Riesling; Blushing Bride, a slightly sweet wine made from the Creek muscadine; Autumn Red, a clean, crisp red made from a blend of muscadine fruit; and the Lakeside Red, a dark, hearty red wine made from a Vitrus vinifera hybrid grape.

The Lakeside Red is an Alabama wine made from a grape that is “similar in appearance to what you’d see in California or France” rather than the traditional muscadine, Lewis said. The Lenoir grape, used to produce the wine, is an American hybrid popular in Texan wines due to its resistance to the deadly Pierce’s Disease, a common threat in warmer areas.

“I’m prejudice, but quite frankly their (Texas vineyards’) wine doesn’t stand in the shadow of ours. It’s just, it’s non-existent,” Lewis said.

These delicious wines do not come without effort: the Lewis clan prunes, picks and crushes the fruit by hand.

“We do it all right here. It’s a small operation, but it works great. We usually do our crushing and pressing in a tent out between the vineyards,” Lewis said.

Lewis Lakes Vineyards’ wines are sold at the vineyard’s tasting room, as well as in Columbiana’s Piggly Wiggly, but Lewis has plans to expand distribution in the future.

“We’re on track to sell in some restaurants, but we’re taking it one step at a time,” Lewis said.

Lewis loves the process of growing the grapes and bottling the wines, but he warns others interested in getting started that the business is not an easy one.

“Make sure you really enjoy what you do,” Lewis laughed. “It sure is a lot of work.”

Woman sentenced for assaulting homeowner while running from cops

By NEAL WAGNER / Managing Editor A 30-year-old Montevallo woman will spend the next five years in prison after she... read more