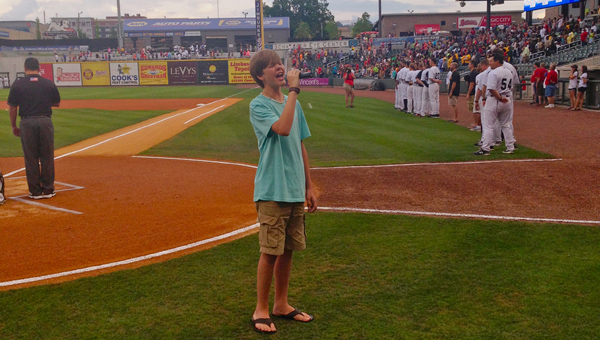 HELENA—Jordan Narkates discovered his musical talent almost by accident two and a half years ago around Christmastime when his cousin convinced him to sing for this grandmother.

“Her jaw dropped to the ground,” Jordan said, adding he was equally surprised by his own ability.

On June 13, Jordan sang for his grandmother again, but this time at Regions Field in front of thousands of spectators as the National Anthem performer.

Jordan was chosen from a pool of “hundreds” for this opportunity, his mother Missy Narkates explained.

“You walk into the stadium and they give you a number,” Jordan said of the auditions in which hopefuls are asked to perform the National Anthem in front of each other and judges without any musical accompaniment. “You can go off key really easily when you’re not using a karaoke track.”

But neither the auditions nor the real performance phased the 13-year-old. “At the game, you can’t see all the people,” Jordan said, adding his show choir competitions in front of judges are far more nerve-wracking.

Between performing with his school choir at Helena Middle School, practices with the renown Birmingham Boys Choir and singing and playing the keyboard on his own, Jordan practices around three hours each day during the school year.

“He has a lot on his plate every night,” Missy Narkates said, noting that school always comes first in their house and Jordan works hard to keep up his grades as a straight-A student. “I’m so proud of his work ethic.”

However, for Jordan music is all about passion, fun and “keeping everything positive.” The young musician often sings “to let out stress,” and draws inspiration from a variety of artists, from Elvis to Bruno Mars.

“My rage rambles all over the place. I try to be like the young Elvis, because the old one wasn’t very good,” Jordan said with a laugh.

Although he enjoys performing, Jordan said at this point in his life, music is not about recognition or a career.

“Some people have told me that my singing has touched their hearts in a way,” Jordan said of his inspiration to sing and perform. “I don’t have a goal (for a career), it’s wherever God leads me in music, that’s where I’ll go.”

A good year for the grapes: Lewis Lakes Vineyards celebrates their first season

The Carlos muscadine is used to produce the Lakeside White, a dry table wine. (Jon Goering/For the Reporter) By Ginny... read more