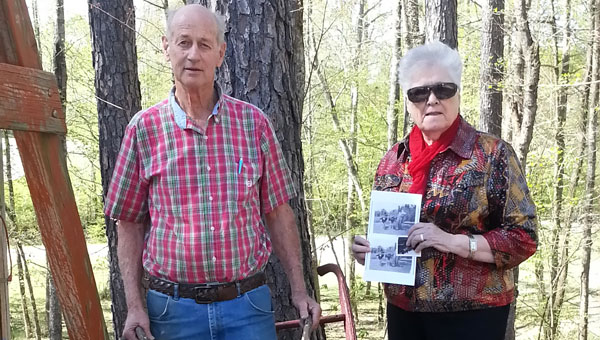 “When we started our Chelsea Museum, we knew most of our historic pieces would be agrarian since this was a farming community,” said Juanita Champion, Chelsea City Council member and chair for the museum project. “We’ve had several types of plows donated. We are working on clearing more space for the museum and will be pleased to add the Shirley plows to the display when we can, but we are excited to add the oxen picture soon. We don’t have anything like it and it shows a real part of our area history.”

She was talking about a recent picture donated to by Donald Shirley, of one of the early area families. The picture has Shirley’s grandfather, L.A. Shirley, showing off his matched yoke of oxen.

“The oxen were not only used for farming,” said Shirley, “they were also used for logging. You would hook up to the logs off down in the bottom and snake them up to the saw mill.

“Granddaddy, had a big farm he cleared out down on road 69. They had a log cabin with a dirt floor. I remember granny sweeping that dirt floor with a dogwood branch broom. They had their own saw mill too,” he added.

“Logging was significant to settling the area,” said Harold Griffin, local amateur historian. “Most of the first roads in the area were just the old logging roads. To get from here to Bessemer you had to twist around logging trails along Simsville Mountain through Helena.

“Two wheeled ox carts played an important role too,” said Griffin. “Gathering rich heart pine with them along Oak and Double Oak mountains for a turpentine mill created the first paths from Shelby County directly into Birmingham without looping to Bessemer.”

Even as late as 1908, maps showed a splintered twisted path over the mountains, not wide enough for a wagon, joined upper Columbiana Road in Jefferson County to its lower portion in Shelby.

“If you look close you can see granddaddy’s named carved on the ox yoke in the picture,” said Shirley. “I am real proud of the picture and glad to share it with the museum.”