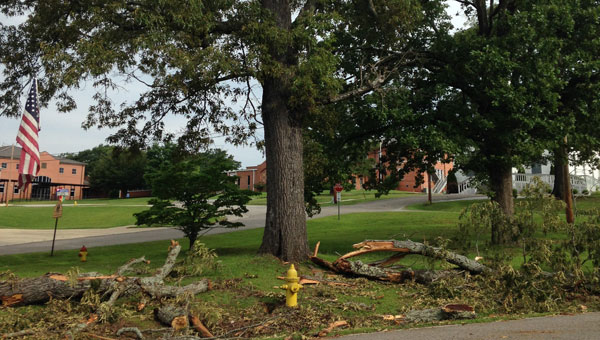 On Saturday, June 7, a strong storm came through the town of Wilsonville. The storm dumped rain and included somewhat of an impressive “light show” with the constant lightning occurrences.

All normal things in the south, especially during the early summer months. However, around 11:30 p.m. the lights went out and that is not necessarily normal in Wilsonville.

Wilsonville is nestled around the large Alabama Power plant off Alabama 25. Citizens of the surrounding Wilsonville area aren’t accustomed to losing power for long periods of time.

“The power rarely goes off for more than a few minutes around here. We seem to be very fortunate in that. I can’t remember much of a time when we have had a complete loss of power here. Even during the snowstorm in January, we didn’t lose power. I can tell you it sure was hot on Sunday,” Wilsonville resident Robert Hill said.

Sunday’s morning dawn showed multiple trees down, branches/limbs scattering some roads and still no power. A large tree blocked part of the drive to the Star of Bethlehem church. Part of several trees lie near the roadway in front of the fire department.

During much of the day on Sunday, the power restoration estimate read Monday, June 9 at noon. With temperatures reaching near 90 on Sunday, some residents sought cool relief elsewhere or gathered relief in the shade of porches and trees. Wilsonville Baptist church cancelled its VBS program due to the outage, announcing via Facebook.

At approximately 9 p.m., power started restoring in portions of Wilsonville with a full restoration occurring around 10:30 p.m.

“The power guys worked hard. They worked through the blazing heat. They apparently had a lot of repairing to do. A little after 10:30 p.m., a truck stopped by my house to make sure we were good to go and not just running off a generator,” Hill stated.

The town of Wilsonville and its residents are thankful for the job the employees of Alabama Power over the weekend.