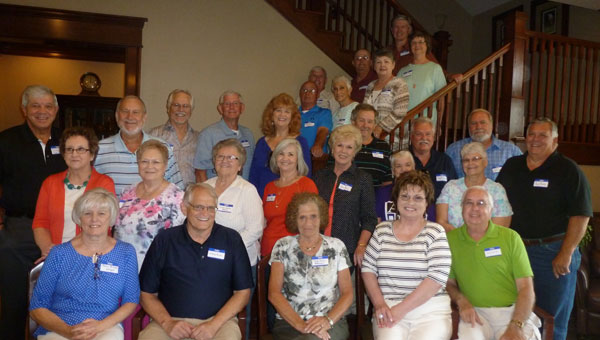 “Angela passed away suddenly on April 10, 2014,” said Moore. “She was our girl Friday and greatest cheerleader. She was our party planner, she stored our memorabilia and our class records – in short, Angela was our keeper.”

Classmates, friends and family came together for a day of fellowship and lunch. Memorabilia and memories were enjoyed as classmates reflected on their days at THS. The luncheon prayer was given by Jerry Carter. During the luncheon, every man who had served in the military received an American flag and shared their military experiences.

“It was a very moving time as some had experienced combat service during the Viet Nam war,” said Moore. “Each gave God credit for bringing them home safely.”

“We got a new stadium and all the boys got out of study hall and planted grass, sprig by sprig,” said Cates. “And it grew!”

“My favorite memory was when I went with my shop teacher Mr. Jimmy Bice and helped him pick out surplus desks for the school,” said Grubbs. “I helped him haul them back and he refinished them. He is on the Shelby County Board of Education now.”

By PHOEBE DONALD ROBINSON / Community Columnist The Columbiana community has surrounded Mollie Wilder of Fourmile and her family with... read more