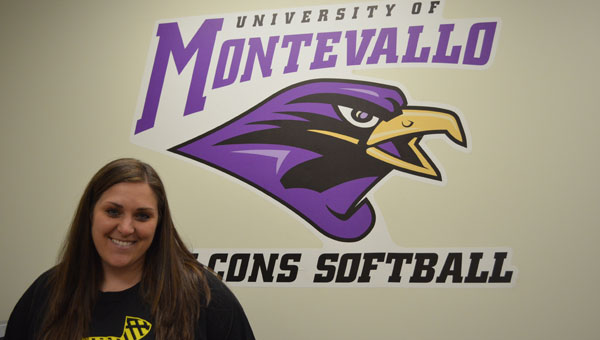 To talk to University of Montevallo Head Softball Coach Lindsay Vanover is to become a Falcons softball fan.

After playing Division I softball at the University of Houston, then teaching and coaching on the high school level, Vanover returned to the collegiate environment at Dartmouth University, where she spent three years as an assistant coach and recruiting coordinator before coming to UM.

“It is such a privilege to not only coach the sport I love, but to ensure that my players receive a valuable education in the process,” Vanover said. “At the University of Montevallo, I can continue to do that as a head coach, and I have found this to be an environment that will also help me to flourish as an individual.”

The inaugural team Vanover has compiled includes players she brought from her recruitment while at Dartmouth, but also through tryouts and word-of-mouth from local high school coaches. She has even recruited players after viewing videos of their games via the Internet.

“Although recruitment today has become less conventional than in the past, I am proud to say that not only will the Falcons have players hailing from Alabama, but also from California, Texas, Florida and Colorado,” Vanover said. “Their representation of the University of Montevallo can bring a broader recognition for the university throughout the U.S., which I think is very exciting.”

This new team requires new facilities, so a softball field is currently under construction at Orr Park in Montevallo.

“We are building an exact replica of UAB’s Division I style softball stadium,” Vanover said. “Such a construction indicates the enthusiasm this university has for this sport and the young women committed to playing here.”

The Falcons’ softball team will begin their first season in the spring of 2015, with a scheduled plan for 59 games. There will be a fall event to meet the team, and mark the calendar for February 1, 2015, when UM will host West Alabama for the first competitive game of the season and fans can catch the Falcons softball fever.