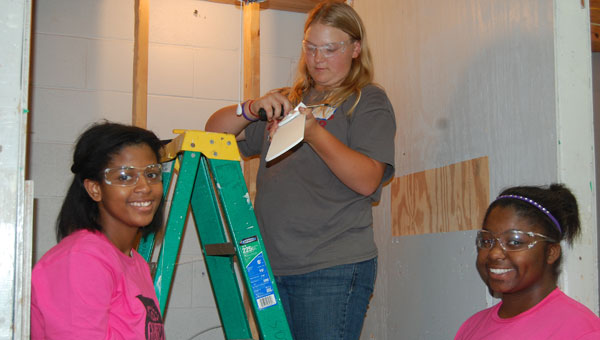 Tyelyn Maddox, Alison Walls and Zoe Dukes work together to install a ceiling fan at the Girls Can Construction Camp in Columbiana. (contributed)

I am not handy. I can (sometimes) hang pictures on the wall, but I mostly just pass along the trickier tasks to my husband, who can put together Ikea furniture like a pro. When it comes installing things, though, we call on professionals.

So, I was really impressed when high school girls from across Shelby County were hanging ceiling fans on their own, welding together metal plates and building an eight-foot wall.

As part of the Girls Can Construction Camp, girls learned all about skilled trades usually relegated mainly to men. When I stopped by, the girls were learning how to install ceiling fans.

The girls were engrossed in the task, and amazingly, all of the ceiling fans worked. I was absolutely blown away by their building prowess.

“We want to expose girls to these experiences,” Camp Director Tom McNeal told me. “We want to show them they can do these things.”

Though I don’t think I’ll be installing a ceiling fan or building an eight foot wall anytime soon, the camp inspired me to learn a bit more about how to do things myself.

Kids all over Shelby County were learning skills in creative camps this week. Students in Montevallo are sprucing up the town with a mural on the side of the Subway building downtown, which is a modern, colorful ode to nature.

All of the kids were so excited to be doing what they loved while giving back to their town. “Art is my favorite thing,” one of the boys told me.

Art is one of my favorite things too, and I for one cannot wait until the mural is unveiled.

When I think of summer, I often think of lazy days by the pool, but kids across Shelby County are working hard to learn new things even when school is dismissed.

I think I could learn a few new things this summer.

Ginny Cooper is a Staff Writer for the Shelby County Reporter. She can be reached at 669-3131 ext. 12 or by email at Ginny.cooper@shelbycountyreporter.com.