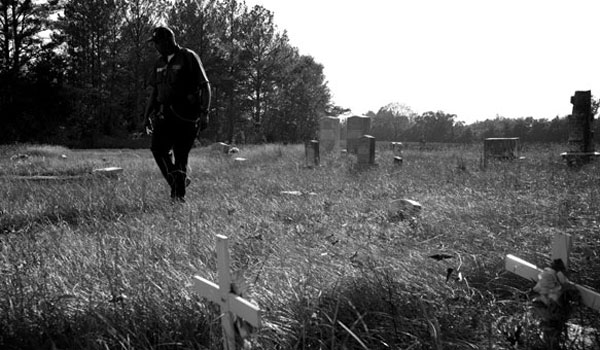 Albert Datcher walks through the family cemetery, which he worked to preserve. (Reporter Photo/Jon Goering)

VINCENT—Albert Baker Datcher was “very surprised” to hear he was nominated for the Idella Childs award.

“It was a surprise. I didn’t know anything about it,” he said. “I didn’t know that particular award existed.”

The Black Heritage Council honored two individuals and one organization with the prestigious award during their 2014 Alabama Trust for Historic Preservation Conference. The Idella Childs Distinguished Service Award is named for the late Idella Childs of Marion who established an “outstanding record as a preservationist of Alabama’s historic African American places,” according to a news release by the organization.

The award “recognizes people who have contributed to the preservation of African American historic places,” according to the release.

Datcher has participated in many preservation efforts in Shelby County. He provided the research that spearheaded the project to revitalize the Bailey Cemetery where his great grandfather’s son, Albert Baker, and other area residents are buried, he led the process in having the cemetery and 10 other sites throughout the Arkwright community listed on the Alabama Register of Landmarks and Heritage and he has donated many items from his collection to the Alabama Department of Archives and History.

Datcher’s work is “one of the best examples of grassroots preservation in Alabama,” according to the Black History Council.

“It was a recognition of my attempt to preserve and record family history,” Datcher said of the award, which was presented to him during a ceremony in Muscle Shoals on April 25.

Datcher’s work was also recognized during a ceremony at the Shelby County Museum and Archives on May 4, where he was honored for his donation of family items, which are housed in the state archives.