American Village bursts with activity for the Fourth of July 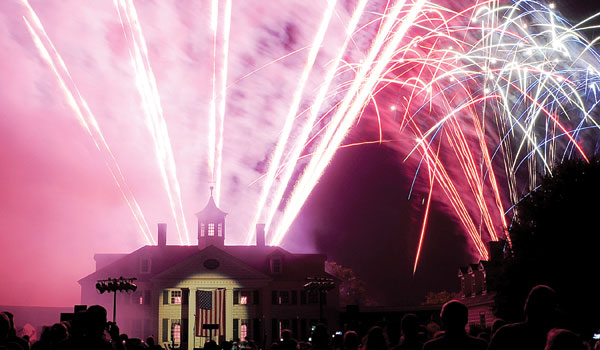 Spectators watch as fireworks light up the sky during the Independence Day 1776 celebration at American Village in Montevallo on a past July 4. (Reporter Photo/Jon Goering)

“On Independence Day, 2014, let us resolve to keep faith and honor the service and sacrifice of our founders and our veterans and the cause of freedom they served,” President and CEO Tom Walker wrote in a welcome for the event.

The festivities will be $5 for visitors, and free for children under the age of four as well as veterans and military.

Programs begin at 11:30 a.m. and will include “something different every 30 minutes,” Poole said.

Visitors can listen to a young Martha Washington describe meeting George Washington, look on as Thomas Jefferson prepares to write the Declaration and view Patrick Henry give the rousing “Give Me Liberty or Give Me Death” speech.

In addition, there will be a plethora of interactive games and activities including Revolutionary Army drills, 18th century games and an Independence Ball.

Kids can get creative with hands-on activities such as “sidewalk art of Independence,” in which children are encouraged to draw the meaning on Independence Day. In addition, visitors can design an American flag, sign the Declaration of Independence and the United States Constitution and play tavern games.

Full Moon BBQ and others will have food on-site.

“Where else can you spend five bucks and stay all day?” Poole said.

In the evening, a program including music by the Montevallo Community Band, the Pledge of Allegiance and the National Anthem will conclude with fireworks lighting up the sky.

“We think it’s the best up close and personal fireworks show in Alabama,” Poole said.