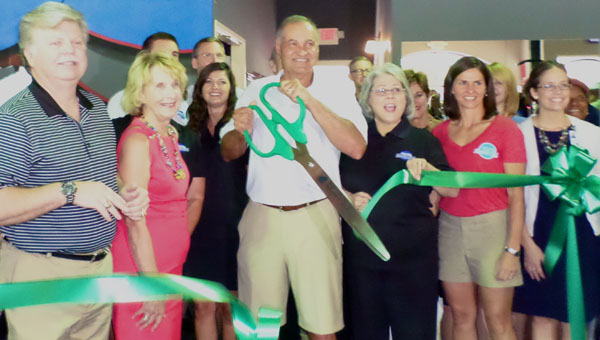 HELENA—Helena Health Club is open for members to workout every day, and the official grand opening celebration was no exception. Family, friends and gym goers alike joined owner Terry Brasseale as he cut the ribbon during the June 19 ceremony.

Brasseale’s “small town gym with big time amenities” opened on March 27, and since that time, business has been booming.

“The response has been overwhelming,” Brasseale said, noting that membership has already grown to more than 680 in just a few months.

The gym offers a variety of different fitness classes, including customer favorites Synergy 360, TRX and “Zumba, of course,” Brasseale said.

Helena Health Club also has on-site childcare every Monday through Saturday, and trained and certified trainers are available to help and answer questions.

“(We have) a family atmosphere, that was really the goal here,” Brasseale said, explaining there are always four or five staff members at the gym at all times to make members feel welcome.

“A big welcome to Terry, he’s been in operation for a while, and it’s going really well,” Helena Mayor Mark Hall said, welcoming Brasseale and Helena Health Club to the town. “It’s a great addition (for the) really health conscious population we have here in town.”

Brasseale said he is thrilled to be in Helena, “it reminds me of my hometown,” he said.

“The people here are just so very nice,” Brasseale said. “They’re appreciative of what we have to offer.”