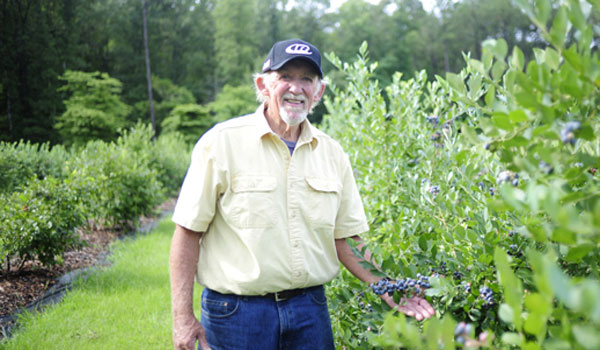 As farmer’s markets are opening across the county, fresh, local produce is in high demand. After a cold winter with unexpected snow and an above average amount of rain during the spring, many farmers are assessing the effect of the weather on their crops.

Jim Suttle, owner of Mountain Meadows Farms, said the excessive rain caused him to lose “about 10 percent of strawberries” and a “very small percent” of blueberries.

“I was really not much affected by the rain, because we irrigate and try to keep the watering pretty consistent,” Suttle said.

In addition, due to a frost blanket, which Suttle kept over his strawberries, the fruit was not negatively impacted by the freezing weather, which actually had a positive impact on the farm.

“I seemed to hold down the insect population, and that’s a huge benefit to me since we don’t use chemicals,” Suttle said.

The freezing weather also had a positive effect for John Lyon, owner of Lyon Farm in Wilsonville.

“The freeze only had a good effect I’d say,” Lyon said. “The berries need a certain amount of chill hours. Most of my bushes are pretty full.”

“Everything has worked out real good for us,” Brammer said.

However, the freeze killed a few muscadine vines at Lewis Lakes Vineyards in Columbiana, and owner Bill Lewis hopes for less rain at the end of the growing season in August in order for the sugar to remain concentrated in the berries.

Despite the weather, the year “surpassed our expectation,” Lewis said.

By NEAL WAGNER / Managing Editor A 40-year-old Bessemer man has been released from the Shelby County Jail on bonds... read more