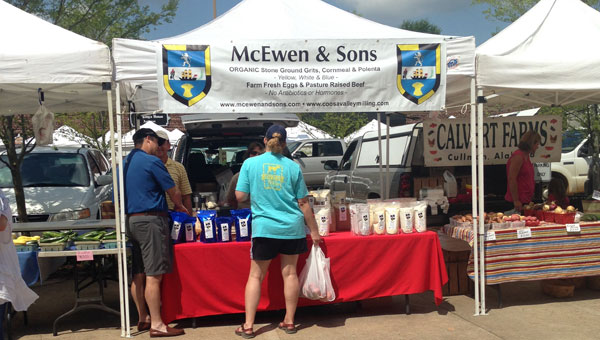 McEwen and Sons provides food and ingredients to several high-end restaurants in the area. (Contributed)

Situated on Highway 25 near the intersection of Main Street is Coosa Valley Milling and Hardware Co, Inc. Owned by Frank McEwen, the farm supply store was established in Wilsonville in 1978.

You might not know, by the looking at the name or the store, that some of the most desirable ground foods you consume at high-end and award-winning restaurants are made in the same building.

“Really starting this was on a whim.  My dad had been up in Severeville, Tenn., and met a guy that owned a grist mill and goods and labeled them for Cades Cove. He sold them all over Tennessee. I thought, I’m sure I could do something like that,” Frank said.

“The corn grinding business is healthier. The corn is never heated, stone ground and sifted. All of our products are organic,” he said. “Cornmeal is where we started, but quickly realized that grits was much more popular.”

They sell to restaurants in Birmingham, such as Bottega, Highlands Bar and Grill and The Veranda Restaurant. They also ship and have customers in New Orleans and Seattle and may other parts of the country. You can also find their products, when include grits, polenta, cornmeal, golden flax seed, popcorn, rolled oats and mixes for hush puppies and fish batter in specialty stores in Birmingham and currently at the Pepper Place Market on Saturdays in downtown Birmingham.

“Wilsonville has been the place for us,” he said. “It’s a quaint town and we have really enjoyed being in this community.”

By SANDRA THAMES / Community Columnist “Letting others see Jesus in me is of the utmost importance, because I may... read more