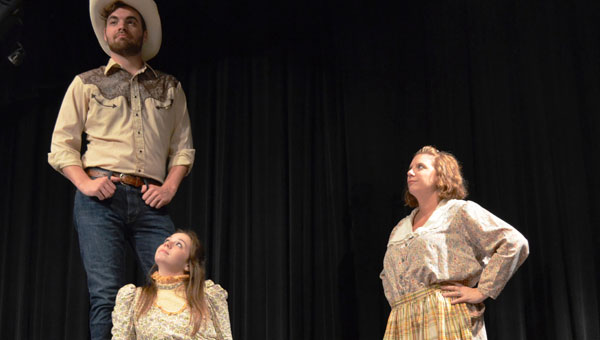 Principal performers blocking a scene for the upcoming Brick by Brick Arts production of Oklahoma at the MHS Performing Arts Center. (Contributed)

Recall lyrics to “The Surrey with the Fringe on Top” and “Oklahoma!” in preparation for Brick by Brick Arts presentation of Rodgers and Hammerstein’s classic musical “Oklahoma,” Friday and Saturday, June 27-28 at 7:30 p.m., and Sunday, June 29 at 2 p.m. at Montevallo High School’s Performing Arts Center.

“We have, within our cast, connections to Montevallo,” producer Jeff Walker said. “The production company draws from the University of Montevallo Theatre Department and UM graduates. We find that these productions provide a way to continue theatre after graduation, for actors to continue finding an outlet for their passion, and performing here makes sense, since Montevallo is a community that supports the arts.”

Everyone involved in the production does so as a volunteer. All monies raised go toward paying for the show: The sets, costume rentals, advertisements and the royalty rights to perform.

“Community theatre is a way to interact with people you may not have met before,” director Stephen Billy said. “It can become a means for learning a lot about yourself and others. In the theatre, all actors are equal, regardless of age. When I was a young performer, I found this a liberating aspect and was able to form strong bonds with people.”

“Oklahoma” was chosen for this year’s production because it is a classic from the golden age of musicals, and most are familiar with it and have some kind of connection to the musical.

“Everyone that auditioned is involved in some aspect of the production,” Walker said. “We wanted to be inclusive with the cast, stage crew and orchestra.”

Walker also commented that the cast has enjoyed preparing for the performance, and he believes that their enthusiasm will be evident to the audience.

“Theatre is the ultimate collaboration,” Billy said. “Everyone is important as part of the team, or the show could not be successful.”