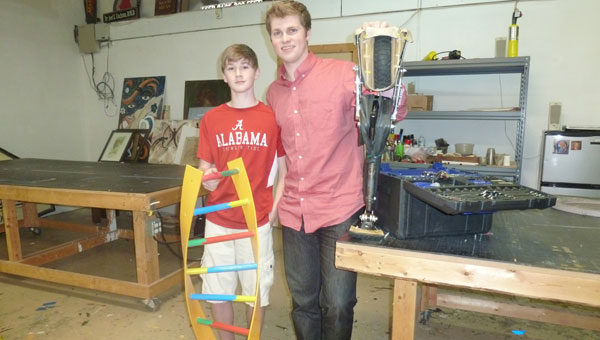 Parker Owen of Columbiana was one of 12 students in the United States invited to the 2014 White House Science Fair by President Barak Obama. The students were FIRST winners – For Inspiration and Recognition of Science and Technology – a not-for-profit organization founded by inventor Dean Kamen to inspire students to participate in science and technology.

Owen, son of Scott Owen, whose paintings are the Liberty Day exhibit at the Shelby County Arts Council, graduated from the Alabama School of Mathematics and Science and is studying physics and business at Auburn University. In 2013 he invented the Cycle-Leg, a prosthetic leg made from recycled bicycle parts.

“I was thinking one day about how to make a prosthetic leg that was inexpensive, versatile, durable and adjustable,” said Owen. “I wanted an ankle that moved forward and backward, an adjustable boot and ‘muscles’, an inner tube with air pressure to adjust.”

In 2013, Owen went on a mission trip to Honduras where he had gotten more than 100 bicycles donated and taught the Hondurans how to make his Cycle-Leg.

Since 2013, when Owen made his first Cycle-Leg from a $25 Thrift Store bike, Owen has been working to improve his Cycle-Leg, especially the boot. The Cycle-Leg is made of just two pieces. One piece is an adjustable socket that he invented while allows great movement and adjustability.

Owen won the 2013 FIRST Future Innovators Award where he participated on the FIRST Tech Challenge Team 4260 and FRC Team 3469, both named Spanish Inquisition. He was the only FIRST alum recognized by President Obama at the White House.

“I am so very proud of Parker and his accomplishments,” said his father Scott.

Terri Stricklin is the wind beneath her husband’s wings