Terri Stricklin is the wind beneath her husband’s wings 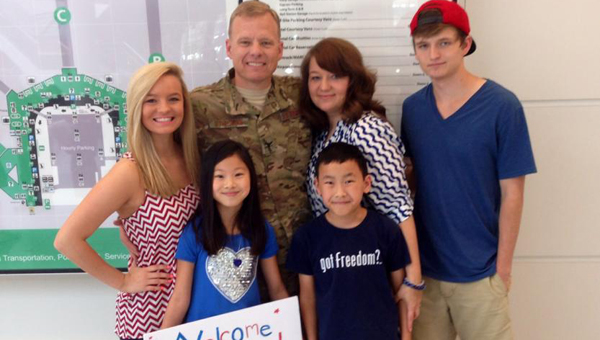 Terri Stewart Stricklin is married to this year’s Liberty Day grand marshal, Col. Chris Stricklin. Chris is a dedicated, decorated and determined warrior who faithfully serves our nation. Terri is the wind beneath his wings – strong, steady and sacrificing as she takes care of home and four children. She is the unsung, hardworking hero behind the scenes as so many military spouses.

Terri and Chris were high school sweethearts at Shelby County High School. After Chris graduated from the Air Force Academy and Terri from nursing school, they married on June 11, 1994. Life as a military couple began.

Chris began flight training during which son Zach was born. Terri kept the baby while Chris did his studies.

“Although we were together, she was very much a single parent for the entire year to allow me to focus on my studies and determine the path for the rest of our military career,” said Chris. “Without her thoughtfulness, I would never have been able to perform and graduate as I did.”

His first deployment was to a classified location. Terri was home with a newborn and 2-year-old and received one weekly phone call.

“That 15 minute call had a horrible connection and a timer cut us off,” said Terri. “During deployments, spouses of his squadron became family. I also learned I can do almost anything I set my mind to, even after something always went wrong.”

During his time as a Thunderbird solo pilot, Chris averaged two days per month at home. His Sept. 14, 2003, flight lasted 22 seconds when he ejected during the opening maneuver. He and the crowd survived but the plane did not.

“The crash was my turn to be strong,” said Terri.  “Chris is like superman, an overachiever, fabulous husband, wonderful father, the whole package. Afterwards, Chris and I went to China and adopted our two youngest children. I have learned to live each day like he deploys tomorrow.”

The Stricklins recently celebrated their 20th anniversary. In a few weeks, the family will be moving to Turkey, their 15th move in 20 years.