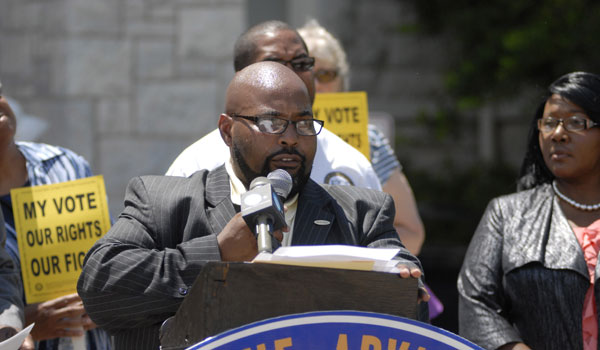 COLUMBIANA—Approximately 15 people stood outside the Shelby County Courthouse on June 25 to commemorate the one-year anniversary of the United States Supreme Court ruling in the Shelby County v. Holder case, which declared sections 4b of the Voting Rights Act of 1965 to be unconstitutional.

“We refuse to stop (protesting) until that right (to vote) has been restored to its proven function,” Shelby County NAACP President Reverend Kenneth Dukes told those gathered at the Shelby County Courthouse on June 25.

“I am here because Shelby County let itself be a tool to eviscerate the Voting Rights Act and it’s been nothing but bad news for black people, old people and poor people ever since,” said protestor Nancy Wilstach.

At issue in the Shelby County v. Holder case were sections 4b and 5 of the Voting Rights Act. Sixteen states, including Alabama, with a history of racial discrimination, were required to obtain federal pre-approval of all changes in election procedure. Section 4b contained the coverage formula that determined the jurisdictions subjected to obtaining federal pre-approval, and without the formula no jurisdiction will be subject to section 5 unless a new coverage formula is enacted.

The NAACP held about 15 events around the country to commemorate the anniversary of the ruling.

Kevin Myles, the national field director for the East division of the NAACP, spoke against both the Supreme Court ruling and Alabama’s photo voter ID requirement.

“You are more likely to be struck by lighting, survive, and be struck again than encounter in-person voter fraud in Alabama,” Myles said, regarding the ID requirement. “I am here to remind you that voter suppression is alive and well. We need the protection of section 4.”

Bernard Simelton, the Alabama NAACP state president, also spoke about the Supreme Court ruling as well as the Voting Rights Act Amendment of 2014, which is currently being debated in Congress.

The Voting Rights Act Amendment of 2014 would require any state that has committed five or more voting violations in the past 15 years to obtain federal pre-approval. Alabama would not be covered under the amendment if it is passed as written.

“We need to go back and start over,” Simelton said of the amendment, and encouraged lawmakers to revise the bill to be more effective.

Simelton encouraged the crowd to register to vote, become more knowledgeable about issues and how legislators’ views on those issues, let senators and representatives know concerns, be observant and tell others to vote.

The gathering was not a celebration, Simelton emphasized, but rather a cause for mourning.

“You have devastated our community,” Simelton said of the 2013 ruling. “This (Shelby County) is really where this all started from, and this is where we want it to end.”

Simelton also urged the crowd to battle the decision “in courts, on the streets and at the ballot box.”

“We all are in this together,” Simelton said. “This is not a black or white issue. It’s a civil rights issue, a right or wrong issue.”

Trips for Kids takes on the trails

Trips for Kids Birmingham works with organizations such as the YMCA, the Boys and Girls Club and church groups to... read more